CNN streaming has shut down after just one month, and Netflix is losing members. People will always want serial entertainment of some kind, so, just as TV and cable transformed to streaming (sortof), so too will streaming transform to something else (sortof). But, if they're not going to CNN and Netflix, are they going to CBS and Disney?
Sort by date Sort by votes
A

Alcove Audio said:
Instead of having to subscribe to an entire platform - NetFlix, Hulu, Paramount, Disney+, Discovery+, et. al. - you subscribe to the hosting platform, then pick and choose the content you want to watch with commercials, or, for an additional fee, without commercials.
Click to expand...


AcousticAl said:
It‘s also hy-STER-ical that people are pining for a centralized access to streaming service. One access that includes all the platforms.

I mean, they want a la carte cable, but they want cable. And we have come full-circle.

But there’s a problem with a la carte packaging. Network companies may have a selection of network offerings that includes a couple of successful flagship networks along with a smattering of not-as-well-distributed secondary networks. The revenue from the flagships is what pays for content development on the secondary networks. If viewers pick and choose what they want, we’re going to see a shrinking in the variety of available content. Some may argue that’s a good thing, and in some ways it may be, but it does decrease the development of new ideas, which means that it’s harder for content creators to get into the game

sfoster said:
I see the rationale for cnn+

So much news is BS clickbait headlines and it puts sensationalism over substance.
I can see the rationale of people wanting a news source that didn't have to depend on a view count and could go back to quality journalism instead of clickbait.

However... There is just too much news everywhere all the time and all it does is make people feel bad. its all stupid anyway.
If I were a super genius and spent the next 30 years learning every detail about news and politics guess how many peoples minds i would change about issues ? Effectively ZERO. cause HUMANS DON'T CARE ABOUT INFORMATION. As a species, humans simple do not care for information, no amount of information is gonna change anyones political views. people believe what they want to believe and thats it.

So it is no surprise at all that cnn+ would fail.
Click to expand...

As far as clickbait news and algorithm push bias, I agree, the newsfeed at large has become a mess, driven by statistically calculated emotional response curves. Basically this is one of the most irresponsible slippery slopes that humanity has ever gone down. The proliferation of a million news services drove headline writers into a competitive frenzy, the end of which was "The Algorithm". If you understand what it's doing, and the effect it's having, you can grasp how this is the beginning of the end. People saw that they could get a competitive edge in a fracturing market by having a computer triangulate in on what news got the most response. Combined with social media's ability to cater news feeds individually, this created a disastrous trend. I don't think there was any malice intended, just people trying to make a quick buck, and not really being smart enough to wield the power that they discovered.

What happened after the algorithm took over is that it discovered that people responded to news most enthusiastically when angry, when polarized, when given an enemy to hate. News that didn't accomplish these things began to fade, and the machine pushed more and more of the content that produced response, the lifeblood of the news media industry. The ability to target information individually got rid of the rails, the balance, that had previously kept news more truthful. There is no longer the truth, there is only your truth. The machine will send a republican an article about how Joe Biden sacrifices babies to Satan so that congress will outlaw the bible. On the same day, the same machine sends an article to the democrat across the street, explaining how every cop shoots an average of three minority people per shift. The machine doesn't care about the people, or the articles, or the truth. But it is measuring how fast they click, how much they click, and how many comments they make. Now social media companies are printing money at record speeds, and people are more divided, misinformed, and polarized into groupthink than ever before. The main takeaway is that there is no one at the wheel anymore. Those that do have control are trying as hard as possible to spin opinion their way, and people they do reach get caught in a confirmation bias feedback loop created by the machine to drive traffic, nothing else.

Here's one chart showing the change on a cultural level - 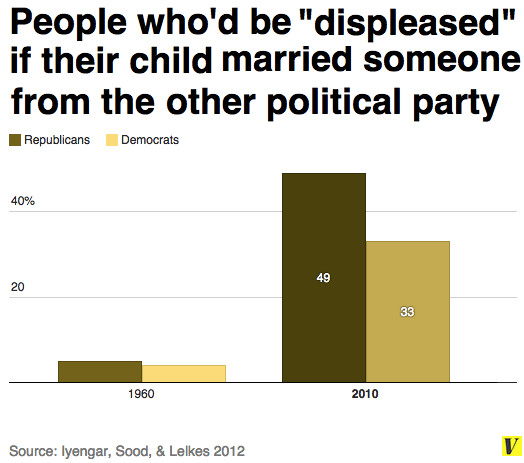 A lot of this division is based on what social media has told us that the other side thinks. Sometimes it's accurate, but even then, people only started thinking so many crazy things AFTER the machine created the echo chamber. Each year, my dad becomes convinced that the democrats are going to go around door to door and take everyone's guns away, but if you check the records, it's never even been suggested by anyone in government.

And now, a few years later, we are reaching the final stage, an almost full blown intolerance of everyone, by everyone. Even campaigns for tolerance have backfired, making everyone more intolerant, via the algorithm. Here's an informational video about that reality.


And what does this mean for indie film? It means that there is now nothing that you can do that at least 50% of people won't actively hate. Doesn't matter what side you are on, or if your views are more complex than tribe A or tribe B. You know how people hear about films? Social media, which is run by the algorithm.
Upvote 0 Downvote

indietalk said:
The irony is "cord-cutting" cable was supposed to make life simpler. No more fluff packages with channels we didn't watch. Now we not only have streaming channels, but fluff streaming packages that even overlap others, and streaming exclusive content that one must have to view one show... and it's exponentially more complicated.
Click to expand...

lol, so true, I would refer you to my thread "the cobra effect"

Humans seem to have difficulty coming up with a cure for something that isn't worse than the disease.

I've seen this same thing unfold a million times, and the pattern seems to be that a new idea is good on day one, but then unravels under stress testing as millions bandwagon on the success of the original concept.

What would be great is if people could keep the original GOAL in mind, rather than the original solution. People have a way of ascribing supernatural significance to milestones, and then trying to force the future to fit ideas that worked in the past. I think it's mostly laziness, and sunken cost fallacy thinking.

It's so obvious what's going to happen here. Eventually, we will get a unified streaming service, and it comes over this thing called a cable. lol. The problem is still the same one they were trying to correct back then. It worked for a minute then failed after the pile on, exactly like I outlined.

Nate North said:
And what does this mean for indie film? It means that there is now nothing that you can do that at least 50% of people won't actively hate.
Click to expand...

That actually doesn't bother me. I think the great thing about indie film is that you're NOT trying to appeal to everyone.
Leave that to the Marvels & Disneys of the world, and find your niche that you want to appeal to. That's the way I've always approached it.
www.maralesemann.com
Upvote 0 Downvote
A

mlesemann said:
That actually doesn't bother me. I think the great thing about indie film is that you're NOT trying to appeal to everyone.
Leave that to the Marvels & Disneys of the world, and find your niche that you want to appeal to. That's the way I've always approached it.
Click to expand...

That’s not to say that offending people is what qualifies meaningful art. No all good art offends people, and not all art that offends people is good. However, any time you present a deep topic, there will be haters. Indie film doesn’t have the restrictions of corporate studio heads keeping things from getting deep or introspective, and that’s a plus.
Last edited: Apr 24, 2022
Upvote 0 Downvote
A

indietalk said:
The irony is "cord-cutting" cable was supposed to make life simpler. No more fluff packages with channels we didn't watch. Now we not only have streaming channels, but fluff streaming packages that even overlap others, and streaming exclusive content that one must have to view one show... and it's exponentially more complicated.
Click to expand...

The more advanced tech has become, the harder it is to use - at least, that's been the trend of the past decade.
Upvote 0 Downvote

Staff Member
Moderator
This article in Deadline today is an interesting follow up, since the Roku Channel is free.

Staff Member
Admin
Roku Channel is free with premium options. Like you can now get Discovery+ through it instead of the standalone app. Same cost.
Want a signature for fun or advertising?
indiePRO members can put text and a link here!
indieBIZ members can put text, a link, and an image!

Upgrade Now!
Upvote 0 Downvote
You must log in or register to reply here.

festivals Filmmakers Should Avoid Online Film Festivals, Unless They Ask These Questions — Opinion