Before she hit her sweet 16, Hannah Marks had already lined up an impressive array of acting credits for a rising young performer: an arc on “Weeds,” appearing as Justin Long’s little sis in comedy “Accepted,” and stints on series like “Ugly Betty,” “Criminal Minds,” and “Private Practice.” But what she really wanted to do was direct. And write. And keep acting, too. What she really wanted to do was everything.

As Marks rolls out her third directorial effort, the Amazon-backed coming-of-age dramedy “Don’t Make Me Go,” starring bonafide Internet Boyfriend John Cho and rising star Mia Isaac, the just-turned-29-year-old filmmaker is only continuing to grow as a creator, while building on the valuable stuff she learned as just a kiddo.

“Being an actor myself, and specifically a child actor, I do think it’s served me as a director,” Marks said in a recent interview with IndieWire. “I can’t imagine having directed without having all that prior experience, getting to know what a crew does and feel what it’s like to be there. I can’t believe people do that!”

It’s no coincidence that one of the big draws of “Don’t Make Me Go” was the chance to cast other young talents, including newcomer Isaac as teenager Wally, who embarks on a road trip with her dad that has an unexpected end point. “It was her first movie, and I really felt like I got to pull from my experiences as a child actor, and hopefully be really supportive and respectful and encourage her and make her feel confident, because that’s what I would’ve wanted at her age,” Marks said.

Isaac was just 16 when they shot the film, the result of a “big search” to find someone who could go toe to toe with Cho. “Mia stood out immediately,” Marks said. “Moments when she wasn’t speaking, I could really feel her listening. I never once saw her with her cell phone on set, which is pretty much insane for any human being, much less a teenage girl. I would pop in the hair and makeup trailer at five in the morning and she would be journaling in character, instead of scrolling on Instagram.”

While Marks’ previous efforts have mostly focused on romantic relationships, they’ve all come with a bit of twist: The Maika Monroe-starring “After Everything” is about a brand-new couple dealing with a serious illness, while Tribeca premiere “Mark, Mary & Some Other People” is about a long-term couple that attempts to open their marriage to polyamorous pursuits. 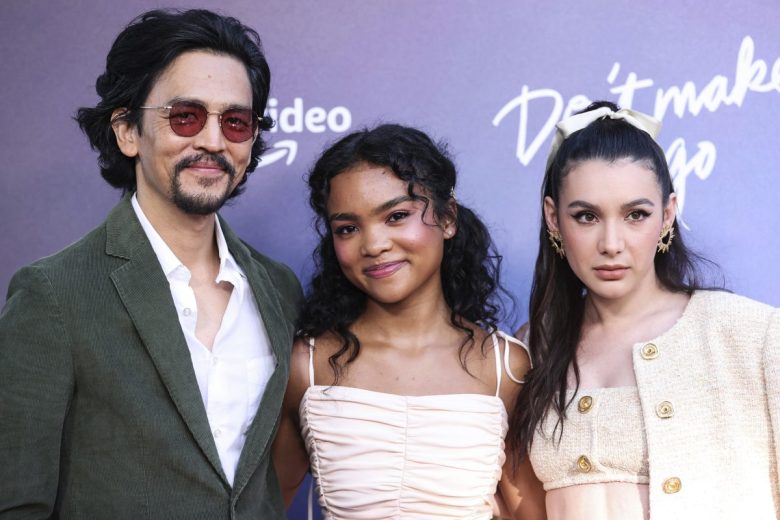 “Don’t Make Me Go” appealed to her desire to keep telling relationship-centric stories that don’t always get a ton of play on the big screen. She was taken by Vera Herbert’s script because of the father-daughter story at its heart, “which you would think would be in so many movies, but it’s not,” she said. “I definitely try to explore relationships that feel different to me than what I’ve typically seen on screen. I try to take on a different perspective, one that we can all relate to, but that isn’t always represented.”

As is typical with her directorial efforts, Marks appears in a small role in the film. “I still love acting,” Marks said. “It’s hard to pursue it at the same time as directing, because writing and directing is so all-consuming. But I intend to keep doing it, maybe it’s just me doing small parts in my own things. I love being around actors and working with actors so much. It’s definitely my favorite part of the process.”

One part of the process that doesn’t work for Marks: watching other people’s movies while she’s working on her own. While most people spent the last two-plus pandemic years boning up on their cinematic blind spots, Marks purposely stayed away.

“I can’t watch movies or TV shows while making something. It just influences me too much,” she said. “I’ll be like, ‘Oh, why didn’t I do a really long zoom?’ or something that’s not relevant to our movie. Every narrative piece that I watch, I’ll view through the lens of the movie I’m working on. It’s not healthy for me when you’re comparing yourself. Even if you don’t like something, that’s not healthy either, because then you’re trying to avoid a trap that you weren’t going to fall into anyway. It’s just too much of a mind-fuck.” 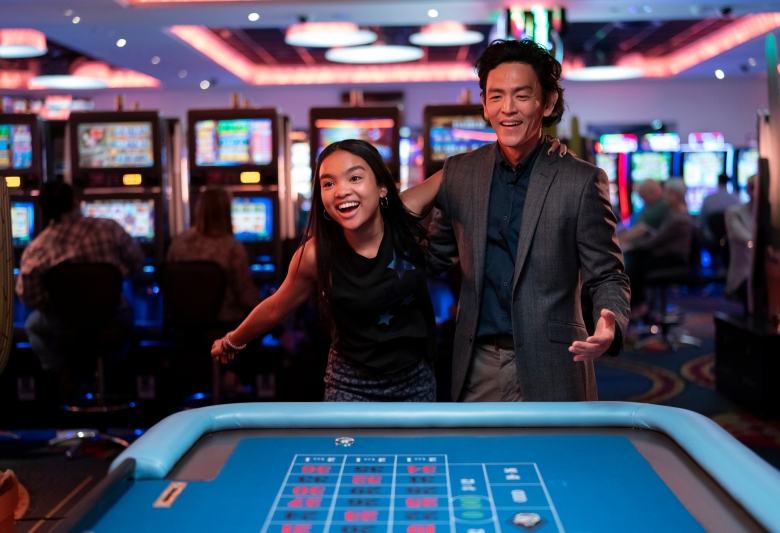 Marks may sound consumed with work — asked if she’s a big reader, she admitted she’s a “big reader of scripts,” but she wants to be reading more books — but she’s intent on striking a balance between Hannah Marks the filmmaker and Hannah Marks the, well, everything else.

“I go a little crazy if I don’t have a project or something I’m pursuing,” she said. “But as I’m getting older, now I’m starting to realize that having a home life and a routine and hanging out with my boyfriend and my dogs and my family is really valuable. It’s not all about your career, but I think that’s something I had to age into as a very neurotic, ambitious, driven teenager. It’s lonely being like that.”

When she is able to watch other films, she goes for an eclectic bunch, and when asked about her favorites, she names “Catch Me If You Can,” “The Social Network,” “Ratatouille,” and “Force Majeure.” Her favorite movie as a kid was “Big,” which was inspiring to the young filmmaker because “obviously, it was Penny Marshall!” (She’s also got an Instagram account, “Movie Club 3000,” where she posts stills of the films she’s watching. Recent entries include “The Talented Mr. Ripley,” “Minari,” and “Moneyball.”)

Marks notes that while her “movie buff” mom watched a wide range of films with Marks when she was younger, she also edited some of what her daughter saw. “I remember that scene in ‘Big,’ when he touches her boob, I never knew that scene existed, because it would be fast forwarded through,” she said with a laugh. “I’d have to leave the room and then come back. I was shielded a bit.”

Marks has yet to enter the studio filmmaking fray — both “After Everything” and “Mark, Mary & Some Other People” premiered at festivals and were released by boutique labels — but she’s clearly thought a lot about the ways in which films are distributed these days, including the raging streaming-versus-theatrical debate.

“Of course I have nostalgia for movie theaters and think that that’s the best way to watch a movie, but the fact that there’s streamers means so many more movies are getting made, so many more storytellers are getting opportunities, myself included,” she said. “The fact that streamers exist allows me to have a career and be able to make movies.”

But while “Don’t Make Me Go” will debut on Amazon Prime Video, Marks got to enjoy a theatrical experience when it premiered at the Tribeca Film Festival earlier this year. That stuck with her.

“It was so cool to see people laugh together, people were crying,” she said. “We did the Q&A and no one left! It was so nice to have everyone stick around, because they were still feeling the emotion of it. I’m not sure if that would happen when watching it at home, but I hope so.”

Marks is currently finishing her first cut of “Turtles All the Way Down,” adapted from the beloved John Green novel of the same name and bound for HBO Max. Like “Don’t Make Me Go,” the film follows a 16-year old high schooler (Isabela Merced) with OCD and anxiety who embarks on a quest to find a fugitive billionaire that has unexpected consequences.

After that film (her fourth directorial effort before the age of 30), Marks is hoping to make a more adult project, confessing she’s ready to “age with my characters,” especially if that means writing. “I definitely know that, whatever my next project is, it will be something that I write, just because the last two are things that I didn’t write,” Marks said. “It’s a great experience, because you really have a different perspective on the material, but I am craving writing again.”

Asked the now-inevitable question put toward seemingly any and all rising filmmakers — “has Marvel called?” — Marks gamely responded that the superhero powerhouse has not called “as far as I know,” but she’d pick up the phone if they did.

“Mark, Mary & Some Other People”

“I’m not a huge superhero movie person, but I love that people like Taika Waititi are taking it on,” she said. “It seems like there’s a lot of room to have an interesting perspective in the Marvel universe. But I haven’t been available in a few years, so I’m very curious what’s out there. I’m completely open-minded, and I think it does sound interesting to me, because I know I want to keep going bigger.”

When she spoke to IndieWire in late June, she was on day two of her “Turtles” edit. “It’s good so far!” she said. “I just got to see the three-plus-hour assembly of it the other day, which is always crazy, because you’re going to cut it in half. It’s like a block of clay that has to become a sculpture. And the assembly is always so wildly different from the director’s cut or the cut with the producer’s notes or the studio’s notes. It’s amazing how much it can change and shape shift.”

As she’s matured as a filmmaker and person, Marks said she’s made a concerted effort to not be defensive about criticism. She’s worked on taking it the right way.

“I was really defensive about criticism when I first started submitting scripts and when I was trying to get an agent for writing,” Marks said. “But it’s something that I’ve made a conscious effort toward [not being defensive about], so I’m so much better at it now, but it takes work. It takes work. You have to take a deep breath and remember that everyone just wants to make something good. It’s not personal. I have an alarm on my phone in the morning, and you know how you can put a label on your alarm? My alarm says, ‘Don’t take things personally.'”

She added with a laugh, “Technically it says, ‘Don’t take things personally. And have fun.'”

“Don’t Make Me Go” will be available to stream on Amazon Prime Video on Friday, July 15.
Click to expand...