[Editor’s Note: The following article contains spoilers for “The Lord of the Rings: The Rings of Power” Episode 4, “The Great Wave.”]

“The Lord of the Rings: The Rings of Power” is the product of an endless supply of resources. For all its grandeur and detail and physical craft on display, there’s one thing that the show has had in the early part of its run that’s almost always a lot harder to pin down: timing.

Take the series’ most recent episode, which finds Galadriel (Morfydd Clark) in a verbal showdown with Queen Regent Miriel (Cynthia Addai-Robinson). With fierce conviction, Galadriel proclaims, “There is a tempest in me that has swept me to this island for a reason, and it will not be quelled by you, Regent.” A hard cut to her being put inside a Númenórean holding cell. Against the backdrop of a real, growing threat, “Rings of Power” still finds room for a well-placed comic beat.

Director Wayne Che Yip, who’s been at the reins for Episodes 3 and 4 and will have directed half the opening season once it’s finished, said that moment — executed as scripted — was a key element of capturing the source material.

“That moment in itself was something that J.D. [Payne] and Patrick [McKay] had written in the script very early on. They have a real passion and a real mastery for language and rhythms,” Yip said. “Something that was important to us was to make sure that there were opportunities to undercut things with a little bit of humor or levity that didn’t take you out of it and and didn’t feel like a jarring tonal shift. It was important and felt like it was in the spirit of Tolkien.”

Blending those emotional beats and finding some lighter moments among the darkness is something that Yip has excelled at in his past TV work. Series like “Utopia,” “Misfits,” and “Hunters” have all demanded a careful understanding of where to embrace the brutality and when to let the absurdities of life have their moment. For a group facing the dangers of migrating to a new homeland, the Harfoots represent one of the best examples of a dash of the former and a lot of the latter in the world of “Rings of Power.” One of the more impressive visual achievements in the season’s opening half is the Harfoot camouflage, where the entire community can take cover and blend in with their surroundings at a moment’s notice. 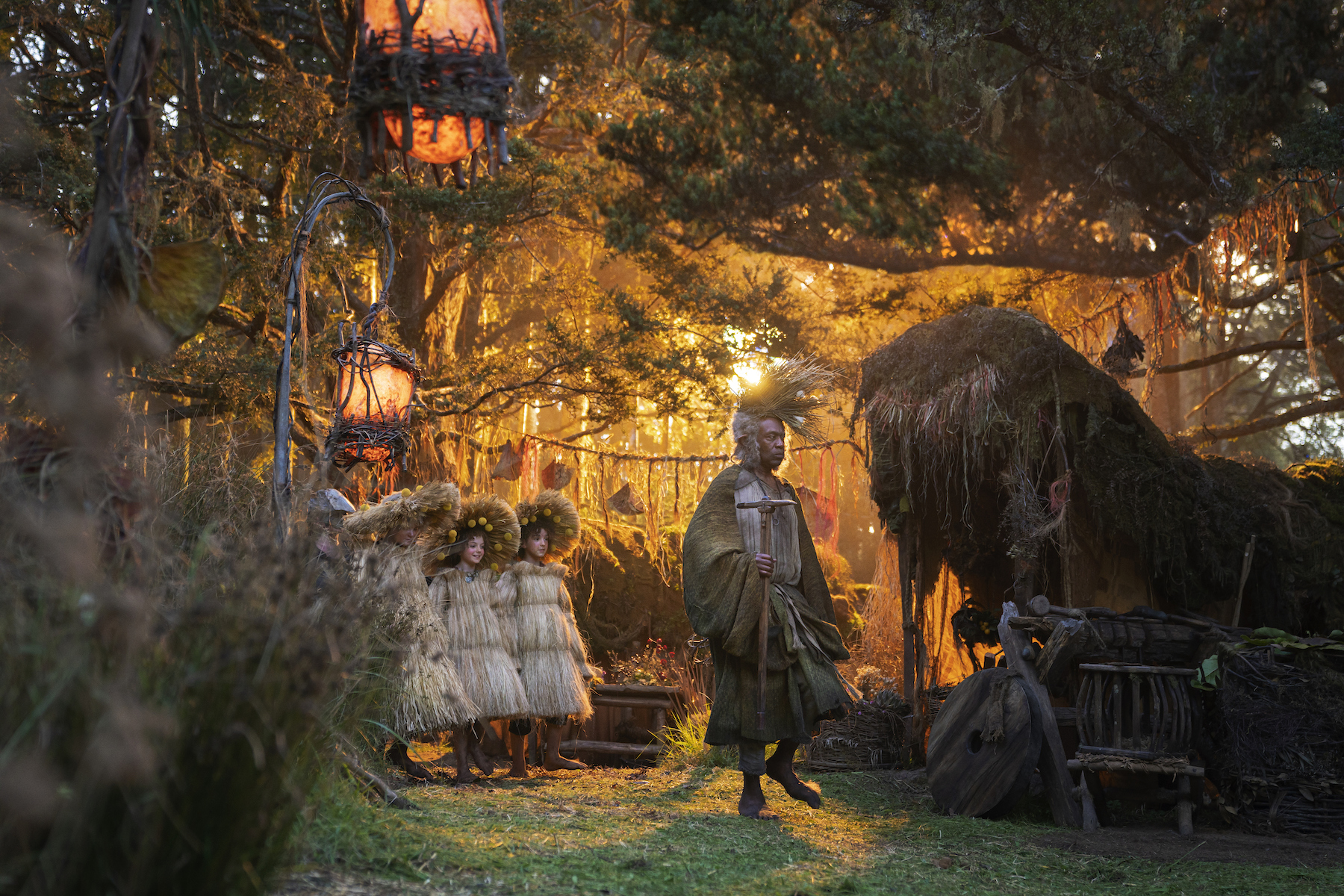 “The Lord of the Rings: The Rings of Power”

“We made sure that everything had the patina of realism. They would be having a festival, but they always knew where the exits were, what they were going to do if there was a noise. We didn’t want to completely ignore what we’d already set up in the first two episodes, that the Harfoots were very secretive. Me, the showrunners, Kate Hawley, our fantastic costume designer, Ramsey Avery, our production designer, we wanted to make sure that we were all coming at it from a point of story,” Yip said. “At a certain point, The Stranger is going to upset things, and everyone’s going to almost armadillo themselves. And much like an armadillo, it should be second nature or even first nature to a Harfoot. That was something that was designed into the clothing from the beginning. Kate had designed this ability, that that Harfoots basically wore their camouflage.”

In another form of hiding, after a few episodes of teasing it, Episode 4 finally unveils Prince Durin’s secret discovery: the mithril that will one day make (among other things) Middle Earth’s strongest glistening chainmail. There’s a real gravitas-evoking pause before that reveal, one designed for everyone to take note, regardless of their familiarity with this world and what’s on the horizon.

“With slightly more fantastical ideas and objects and concepts, what is ultimately going to be identifiable and what the audience is always going to connect to is the emotional performance of the actors,” Yip said. “You don’t need to necessarily understand exactly what Durin is talking about regarding the mithril, but you can see how much it means to him through the incredible performance of Owain Arthur and his scene partner Robert Aramayo. You could see the significance to him of that object is that he’s holding. For the non-fans who might not fully grasp what it is, the hope is at that point, we’re so invested in the relationship of Prince Durin and Elrond that this is elevating the drama and the excitement.”

The same is true for the palantír, the mystical seeing stone that Galadriel samples with Miriel looking on. The transition to Galadriel’s vision of a possible future is a quick, jarring fracture of reality, with icy-colored fragments jutting out from the stone and filling the frame. For Yip, it was a chance to bring in an extra layer to a familiar concept.

“There was a lot of time invested in that transitional moment. Obviously, there’s amazing work that Peter Jackson’s done with his palantír. This was a completely different palantír that did different things,” Yip said. “We were inspired a lot by the patterns of rocks and gemstones, as if the images and the visions were in the fractal nature of the actual stone itself. It felt there was something magical, but organic at the same time.” 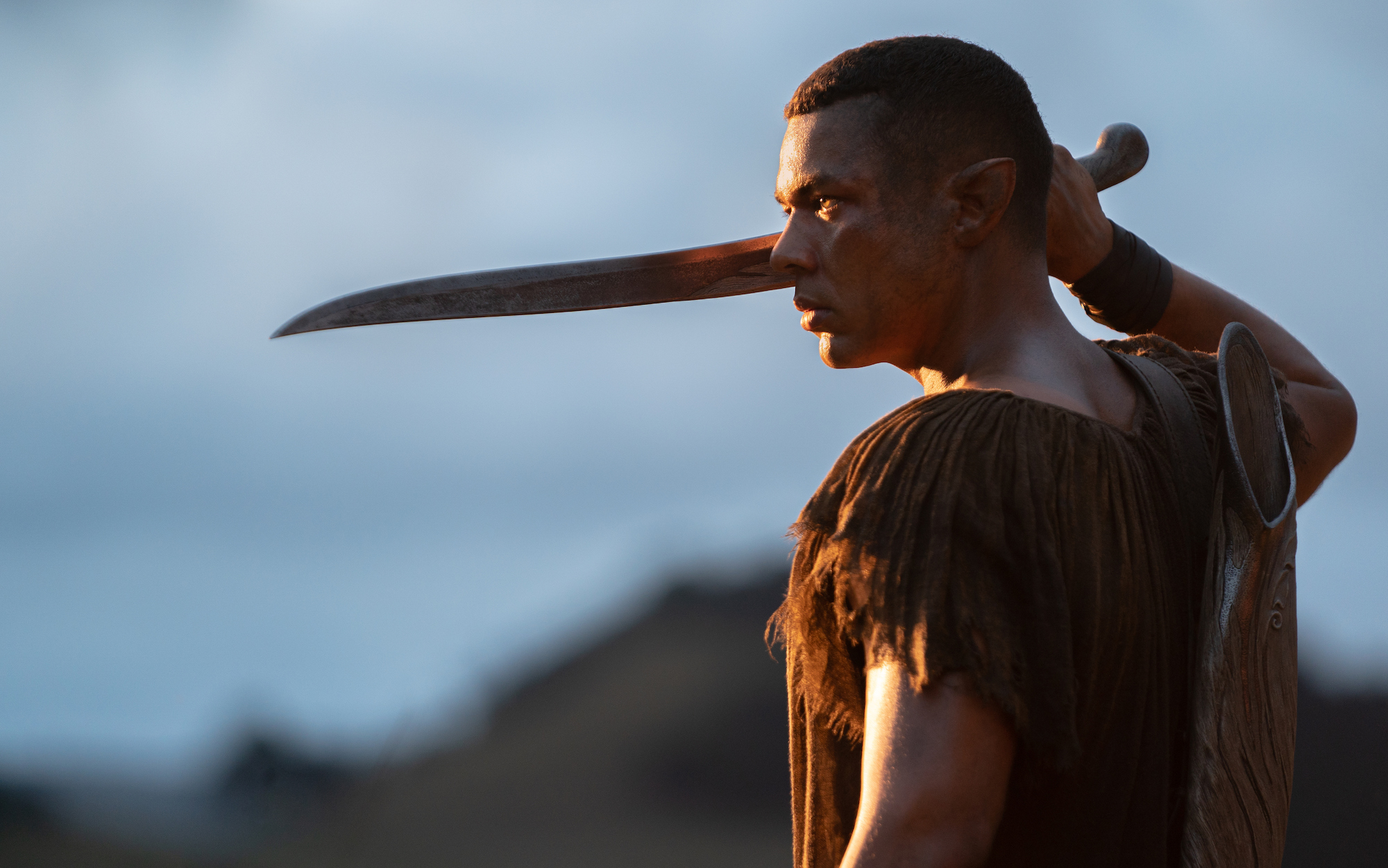 “The Lord of the Rings: The Rings of Power”

As much as there’s room in “The Rings of Power” for the show to get small, this is a massive TV production that also thrives on scale. And it’s not just in the grand, sweeping landscapes that serve as new introduction to established Tolkien lands. The fact that sets like pathways up to Númenórean ports were fully fleshed-out environments meant that Yip and his camera team could take full advantage of movement around a frame. Galadriel’s quick, bounding journey through the balconies and alleys of Númenor make a solid argument for how best to learn about a character’s abilities and personality through movement.

“Having Galadriel on a raft in a storm and then on a boat and then being led through the city, being very static and still, we wanted a moment to let her loose. In a way, have a moment where she is unleashed. We wanted that to be as expressive as possible,” Yip said. “It wasn’t until we were on the actual set before we actually realized the potential of, in Galadriel’s case, going vertically. It’s always nice to have that opportunity. It felt more fun that Galadriel, being light on her feet and being an elf and escaping, that she would move to a higher point. It gave us an opportunity to keep the camerawork flowing.”

That emphasis on movement extends to another elf, Arondir (Ismael Cruz Córdova), both when he and his compatriots are in chains in Adar’s prison camp and when he eventually makes his escape. Yip said that he and stunt coordinator Glenn Suter wanted to make sure that there was a proper mix of gravity and magic in the graceful way that elves were able to move while in combat.

“It was always exciting to come up with concepts and ideas of how to do these differences. Something with a dwarf is always going to be different to something with a human. With an elf, in terms of what was possible physically, they can do things that the other races can’t do. It contributes to that magical quality,” Yip said. “Ismael was very involved in the stunts that involved him. He was training in various forms of martial arts like capoeira, and he contributed a lot to what he felt like Arondir’s character would do in these situations. So things like him jumping on the chains or catching an arrow, that felt like an elf-like approach to a physical problem. There were other ideas that were thrown around, but we always wanted to make sure that it didn’t feel too superhuman, that it didn’t feel like style over content. They’re getting out of a situation in an elf-like way, not creating a situation just so that we could do elf stuff.”

New episodes of “The Lord of the Rings: The Rings of Power” are available every Friday on Prime Video.
Click to expand...

news ‘Lord of the Rings: The Rings of Power’ Final Trailer: Galadriel Battles for the Soul of Middle-Earth

news ‘The Rings of Power’ Showrunners Explain Show’s Connection to Tolkien: ‘This Story Isn’t Ours’