During a recent shoot, I was filming with a Nikon Z6II and I had an Atomos Ninja V monitor.

I had mounted a Samyang 14mm 2.8 on my Nikon and the lens being 100% manual, to get a good focus, I clicked on the "zoom +" button on my camera to enlarge the image in the monitor and make my point.

Once the focus was done, I went back to a classic scale and there on my screen, everything was red like when the "focus assistance" mode is at its strongest. I don't know if you follow me, when the camera indicates areas of sharpness in red (or other colors).

I didn't worry too much but the problem was that once the scene was took, the red didn't disappear from the screen when we watch it on the monitor !!! And then, when I got home, all the areas in red were recorded on the take we had just taken and that was it. I really didn't kiwi what happen and why the red stay on my take.

I thought it was a tune-up bug but no it didn't...

Any idea what it could be?

Here is an screenshot of the raw footage. 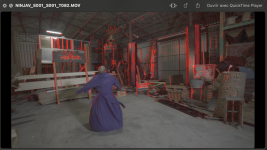 If you were recording on the Nikon, that has to be a bug, because the camera is never supposed to record the "extra" display information.
Last edited: Feb 7, 2022
Upvote 0 Downvote
You must log in or register to reply here.

Saturday at 5:55 AM
Nate North