Robert and Michelle King’s supernatural procedural series “Evil” has long been one of the most terrifying shows on television and streaming (it premiered on CBS before migrating to its current home on Paramount+), as well as one of the most profoundly philosophical.

The two aspects are inextricably linked, as the questions the series asks about faith, reason and whether evil comes from outside of us or within are explored via stories showcasing monsters both paranormal and human. Finding a visual corollary for the show’s ongoing tension between the pragmatic and the spiritual while sustaining its eerie, dread-inducing atmosphere is the job of cinematographers Fred Murphy and Petr Hlinomaz, whose bold approach to lenses and composition has turned “Evil” into not only one of the most thoughtful and frightening series on the air but one of the most visually striking.

One thing that immediately sets “Evil” apart from most other shows is the vertical nature of its compositions, in which Murphy and Hlinomaz exploit the top and bottom of the image in a manner reminiscent of “Night of the Hunter” and “Ida,” two of the series’ main influences.

“There’s a fair amount of room at the top of the frame that ties in with the spiritual theme,” Murphy told IndieWire. “There’s this idea that we’re always looking up, that there’s something above us. The idea is that we’re ‘leaving space for the angels,’ as the director of ‘Ida’ put it.”

In the visual language of “Evil,” the space above the characters isn’t just for the angels, however; there’s often a sense that what is unknown and lurking in the shadows is a threat rather than a comfort, with the abstraction of the frames creating a sense of mystery that plays off the characters’ doubts and fears. 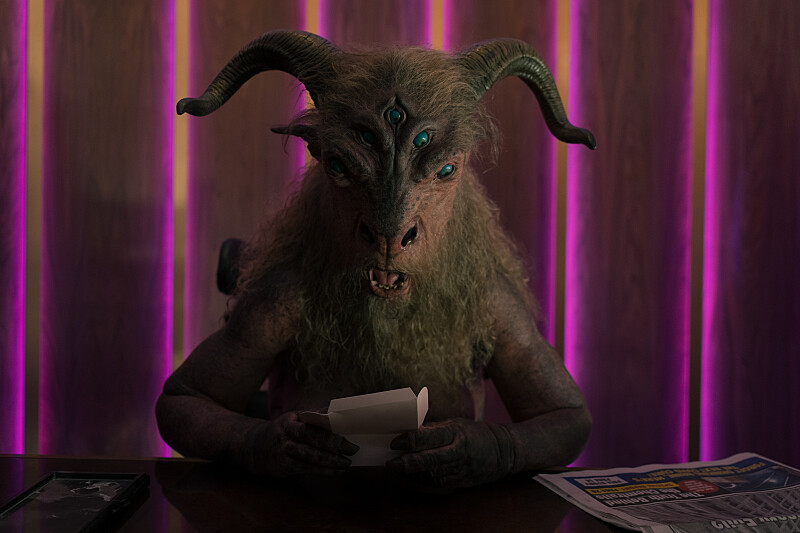 Often in “Evil,” the characters struggle with what is actually happening and what’s imagined, and the audience is invited to share their tenuous grip on reality through an impeccably modulated visual style that rides a delicate line between realism and the supernatural.

In the most ordinary everyday sequences, something always feels just a little off, while even the most outrageous scenes involving demons have some grounding in reality.

In terms of the cinematography, the unique sensations the show creates for the viewer are largely the result of Murphy and Hlinomaz’s philosophy regarding lenses.

“We tend to shoot on extremely wide lenses,” Murphy said. “When we start a scene, Petr and I immediately slap on a 12 or a 15mm lens. We don’t even ask. When it’s not a wide-angle lens it’s a relatively long lens. We’re either shooting around a 15mm or 100mm to 135mm, not much in between.”

While the filmmakers occasionally punctuate their scenes with long lens close-ups to striking effect, the majority of scenes are shot wide, which creates unsettling distortion effects while also conveying a dynamic sense of space in which the viewer gets a sense of just how many areas there are in which evil can hide. The impact is terrific, but not easy for the cinematographers.

“It’s much harder to light because you have so much room to work in,” Hlinomaz told IndieWire. “If you’re on a 75mm 15 feet away you see so little of the set that you can put light pretty much anywhere, but if you’re on an 18mm wide and close you see a huge amount of the set.”

The sharp, precise look of “Evil” is partly due to the cinematographers’ preference of prime lenses over zooms, which Murphy says have multiple benefits.

“We have a zoom, but we rarely use it,” he said. “Primes look better, but they also force you to consider what you’re doing and why. Changing lenses always takes a little longer than people think, but it makes you understand why you’re using a 15mm, as opposed to all of a sudden zooming out to 15mm, zooming back to 20mm, and fishing around. It forces you to use the lens correctly and think about the kind of space you’re trying to create.”
Click to expand...

Ok, pretty basic cinematography stuff, but hey, this is an article that's actually about filmmaking. Good Job Indiewire!
You must log in or register to reply here.