“White Noise” holds a mirror up to American culture, especially cinema history. It’s the purely controlled, heightened chaos onscreen that reminds us why “family is the cradle of misinformation,” much like how the blur of media, art, and celebrity similarly splinter into everyday existential crises.

Based on Don DeLillo’s 1985 novel of the same name, “White Noise” was meticulously written and directed by Noah Baumbach and stars Adam Driver as Professor Jack Gladney, tasked with protecting his family, played by Greta Gerwig, Raffey Cassidy, Sam Nivola, and May Nivola, after an airborne toxic event forces them to evacuate a picturesque college town. “White Noise” premieres in theaters November 25 and streams on Netflix December 30.

Ultimately, “White Noise” is a dissection of the distractions of daily life and the inherent craving to “flatten” our emotions on the inevitable march toward death. But the Hitchcock-meets-Spielberg-meets-Altman sentimentality, with a dash of Wes Anderson, makes “White Noise” a uniquely composite film mirroring culture as a whole — a more meta take on capturing mid-century icons like this year’s “Blonde” and “Elvis,” and marking an ode to spectacle, like “Nope.” Even Professor Gladney’s colleague Professor Murray Suskind (Don Cheadle) in the film compares Hitler to Elvis while lecturing on the beauty of car crashes in cinema devoid of thoughts of fatality.

“It’s so smart that, to sort of explain it, you end up sounding like a stoned teenager,” Gerwig said of the film’s spiraling plot, and its multiple allusions to other works, during a press conference ahead of the opening night premiere at the 2022 New York Film Festival on September 30. “But it chronicles all the ways that we distract ourselves, and then in that, it allows us to delight in it as well. So then you are delighted by the distractions that have already been given to you, and there are kind of multiple mirrors happening.”

Gerwig continued, “In the same way that academia flattens everything, commercials flatten everything. You have a commercial for M&Ms right after plane crash footage. That’s the same value; it comes through the same thing. You’ve got Elvis and Hitler, it’s all the same. There’s a way that we welcome the flattening to our own psyches, because we don’t want to know that we’re on a trajectory that goes one direction. So we go, ‘That’s good. Maybe we’re all flat.'”

There is a lingering theme of déjà vu throughout the film. “If you’re celebrating all that is, you’re celebrating everything that went,” Gerwig noted, joking that she’s “smoking that good California shit” when describing the many layers of the novel and Baumbach’s film adaptation.

“I thought about Robert Altman’s influence in that way of mic’ing everybody and having everybody speak at once but also playing with focus so when the audience is watching, they can sit back and let it all just kind of be noise, or they can go in also see what they want to see,” Baumbach said, citing the “sensorial” element available onscreen in part thanks to the 35mm anamorphic cameras that allowed him to “pack the frame.”

Baumbach referenced Hitchock’s famed “Notorious” establishing shot for a lavish party that ends on a close-up of Ingmar Bergman’s hand holding a key. Now, it’s Gerwig clutching a mysterious pill that allows her to forget her own impending death.

“It’s so much story in one shot, but it’s also showing the broad to the specific, and I think, ‘Of course. This movie is about that in so many different ways,'” Baumbach said. “The film gave us permission to try something new. It has so many genre elements baked into it too. I always wanted to be aware of what was available to me, genre-wise.”

A later scene at a motel is, according to Baumbach, an ode to ’80s noir. “It’s something Alan Parker or Adrian Lyne would have done,” the writer/director said. “I felt maybe it can also be a musical. Maybe the movie has allowed us that. I felt that the movie had given me permission to do something that felt nonverbal, that there was something kind of pure cinema and visceral and pleasurable and exciting in a way to both celebrate life and death at the same time.”

Baumbach added, “Joel and Ethan Coen have a great quote when asked how they adapt other material. Joel said, ‘I hold the book open, and Joel types.'” 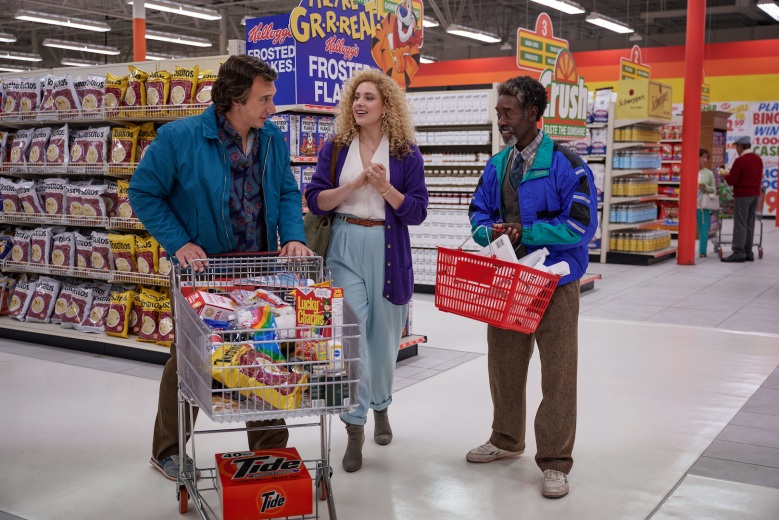 The emphasis on the spectacle of death as far removed from life spills over into domestic scenes with the Gladney family, acting like a dance, with each member existing in different planes, different realities, and different generations, perhaps even different movies altogether, even when just inches apart. Baumbach enlisted “Marriage Story” choreographer David Neumann once more, while also collaborating with Oscar-winning composer Danny Elfman for the first time.

“Even our first conversation, I just talked about what I thought the themes were,” Baumbach said of reaching out to Elfman. “In broad terms, for the first section, the sense is about the systems and the strategies that we’ve created to keep this illusion of immortality going. The second section is death has come to our door, and it’s real, but we don’t know how to deal with this at a distance. And the third section is, OK, now you’ve seen it. What are you going to do now? Can you return to those same old strategies? Do those hold up under this new knowledge?”

The transcendence of genre and tonal shifts of “White Noise” is also what inspired Elfman to sign onto the feature.

Elfman recalled, “I’m in the middle of this ‘Doctor Strange’ movie, and I said, ‘OK,’ and I just wrote some stuff on the fly. The next thing I know, he’s cutting my music into the movie in ways that I haven’t even thought of. I’ve worked on, I think, 110 films now, and this definitely was one of the most enjoyable. I loved it. The response was instant.”

As IndieWire’s David Ehrlich noted in his review, “You can still hear something almost subliminally divine under that uncanniness whenever Baumbach cranks up the volume.”

And that perhaps is the white noise underpinning all of us — now and before — that Baumbach resonated with, bringing that sound resonance to the big screen.

“White Noise” premieres in theaters November 25 and on Netflix December 30.
Click to expand...