news Danielle Deadwyler Shares What Made ‘Till’ the ‘One’

​
It would be unwise to write off “Till” as just another film thoughtlessly harboring in Black American trauma, despite it depicting the the well-known 1954 tragedy of 14-year-old Emmett Till’s murder, and his mother Mamie Till-Mobley’s decision to have an open casket funeral for him, showing the world the indignities Black southerners faced at the time. “This film does not center wholly on the trauma,” star Danielle Deadwyler told IndieWire. “That’s the big misconception. We’re incessantly informing people that this film begins and ends with joy. That this film is critical in understanding that Black families are not just the moment in which they have experienced violence or trauma.”

The film, directed by Chinonye Chukwu and co-written by Chukwu, Michael Reilly, and Keith Beauchamp, is more focused on “what a significant woman did after loss,” said Deadwyler. “[It’s] a miracle to come to such a revelation, a reckoning of the self, of identity, and how you exist in the world. That was critical in the first conversation that Chinonye and I had about what does it mean for Black women to express their pain, to express their rage? And we took all of that extremely, extremely seriously.”

What is ultimately important for people to recognize is that the “Till” story is one for everyone. It is American history without any qualifier in front. “When people bring themselves into the fold of our experience, knowing that they have benefited from the resistance that Black people have had as a result of the trauma that they’ve had to face, then they will understand greater that we are all deeply connected,” said Deadwyler. “We have to keep telling [these] stories so that people are aware.”

The “Station Eleven” actress happens to have a master’s degree in American Studies from Columbia University, and was able to tap into her academic past to research the role of Mamie Till-Mobley. In practice, “that looks like talking to old professors, that looks like hitting up friends who are giving resources that are artistic,” said Deadwyler. “There are substantial essays on Mamie, on Emmett’s case, on their poetic renditions, visual art renditions of the two of them. There are numerous theses and dissertations, some of which I dug into.”

Since the film is from Till-Mobley’s point of view, Deadwyler could not play her as if she had full awareness of her circumstances in context. But the actress said that for her, the research “drives home a more expansive and critical view of what it meant to be in the American South in 1955, to be in Chicago in 1955.” 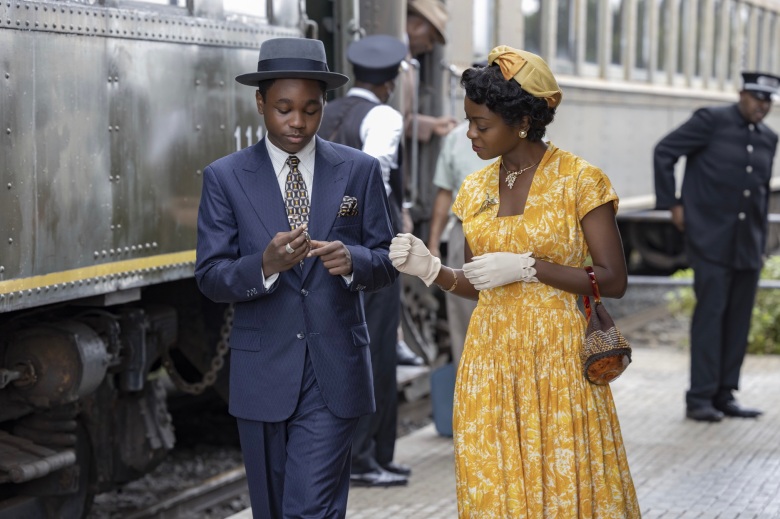 Taking in artwork inspired by the Till family inspired her celebrated performance. Deadwyler offered Danez Smith’s poem “dream where every black person is standing by the ocean,” as an example, but got emotional as she read it. She said, “This poem wouldn’t have been about Emmett until it gets to a line — and I don’t know if it is about Emmett — but this struck me: ‘And then one woman, skin dark as all of us walks to the water’s lip, shouts Emmett, spits, and, surely, a boy begins crawling his way to shore.’”

Even though she’s aware that she put her everything into her “Till” role, and is appreciative of the Best Actress nominations and awards she has received from organizations like the Screen Actors Guild, Deadwyler still feels that much credit should be given to Till-Mobley. “I know I did visceral work, but I can’t help but think that this is assuredly her work on a much… more… grand… scale…,” said the actress. (The ellipses were her suggestion.)

“We’re talking about civil rights, and how that impacts every single human being who lives in this country, which therein influences other countries and individuals and how they perceive how they can fight for themselves. They talk about an American example, or a Black American example — that’s influence. She knew that she had to use the power of the image,” said Deadwyler. “That began to be everyone’s strategy, and the power of the image is still in play in the making of this film, how it can impact people, what it’s doing for people who did not know at all about her, and what it’s doing for people who thought they knew about her. She’s the one.”

Though “Till” took decades to finally make, its theatrical release came on the heels of the ABC limited series “Women of the Movement,” which depicted Till-Mobley’s story but got lost in the sea of shows premiering last spring at the end of Emmys eligibility. “Till” has had better success finding an audience, grossing almost $10 million at the box office, which Deadwyler sees as a testament to what the theatrical experience can offer in showcasing stories of such importance. “When we do things in a ritualized manner, it means something different. It means it’s rich, it’s full of a different kind of energy. To be at home takes away the power of witnessing together, and being impacted by those who are witnessing alongside you,” said the actress. “That’s the beauty of cinema. Cinema is an experience together, outside your nucleus.”

Deadwyler does not pretend to know what is next for her, as Oscars nominations voting closes, and her awards season journey hopefully continues, but she is ready for another challenge. “I always think about weird. Yeah, weird is the foundation. Let’s go weirder,” said the actress. “Experimentation is imperative. If we’re not doing that, then what are we doing? Then we’re stagnant.”

Providing one more insight into her approach to projects like “Till,” as well as an invitation to the future collaborators coming her way, Deadwyler said, “I want to be tested, and pushed, and broken open. And this is the opportunity to do that, and call forth all the folks who wanna do that kind of weird stuff with me.”

“Till” is now available to stream across digital platforms.
Click to expand...

news ‘Till’ Review: An American Horror Story, Told Too Cautiously