The writing team on “Better Call Saul” had no idea how the final season would be broken up. Yet, even though the people involved couldn’t have planned for certain that this would be the opening, it’s hard to think of a better beginning for the series’ final homestretch. Not only is “Point and Shoot” an impeccable ballet of conflicting aims and means, it sets an effective expectation for the remaining five episodes to come: Don’t expect this to feel good.

Take the late Howard Hamlin (Patrick Fabian), who’s only represented by a few of his personal items in the (unsurprisingly poetic) cold open. By the time the attention turns back to the Wexler-McGill apartment, Jimmy (Bob Odenkirk) and Kim (Rhea Seehorn) are the only two who seem to acknowledge that his body is still lying there on the floor, no matter how many people come through that door over the course of the episode. If somebody is going to survive this season, they’ll have to tiptoe around their share of corpses to do so.

Lalo (Tony Dalton) won’t be one of those somebodies. It’s fitting that Gordon Smith is the writer on “Point and Shoot,” given that it’s a mirror in many ways of the Nacho farewell he wrote and directed. They both feature men bent on revenge whose hubris makes them ignorant of their own vulnerabilities. They look at marked men going rogue from a strictly outlined plan in order to have the freedom to go out on their own terms. And both are obviously swan songs for a pair whose ends were surprising but inescapable in their own way.

In Lalo’s case, though, he’s the one holding all the cards at the beginning of his end. Picking right back up after his murder of Howard, “Point and Shoot” begins with a clear contrast: Jimmy and Kim’s abject horror vs. the eerie calm of their tormentor. Lalo offers them an out in the form of a quid pro quo, a life for a life. If “Better Call Saul” gave Lalo his own warped superpower — one magnified exponentially by a seemingly unflappable Dalton — it’s competence. There’s the terror of watching a man being assassinated in a living room but another kind entirely to have that same man explain the simplicity of killing another person, delivered with the relative ease of a calculus teacher saying that differential equations aren’t really all that hard if you just follow the steps. Of course, Kim’s assignment to hunt down Gus (or whoever else opens the door to the Fortress of Fringitude) is a textbook Lalo (and by extension “Better Call Saul”) misdirect, designed to draw The Chicken Man out of hiding.

From there, it’s a showdown of two professionals, each who’ve made a living and stayed alive in their own corner of the cartel chess match. Smith respects both Gus’ intelligence and the audience’s by giving him the minimal amount of detail to realize that sending Kim to his place was a Lalo fakeout. Without knowing what Kim is capable of in other circumstances, Gus recognizes that it would have taken a leverage-less Jimmy a lot more than a simple argument to convince someone that strong-willed to change his plan. Lalo’s not the only one with the superpower here.

Yet, in a battle of reasonable equals, they each swap mistakes. In trying to intercept Lalo at Lavandería Brillante, Gus makes the fundamental mistake of not watching his back. In turn, thinking he’d finally hooked his big fish, Lalo provides just enough an opening for Gus to lunge for the secret pistol nestled inside the earth-mover tread. It all comes down to where each man draws his pride. In referring to Kim as “Mrs. Goodman” and laying out the specifics of the German engineering crew, Lalo’s attempts at disarming his opponents with superior knowledge backfire. Just as he shows he doesn’t know the whole nature of Jimmy’s identity, his assumption that he knows the entire specifications of the underground lab lead him to overlook the one key detail that might have saved him. On the other hand, Gus adjusting his shirt and jacket, so as to face his own potential execution with dignity, may have been what helped buy himself enough time to distract Lalo and his camcorder. 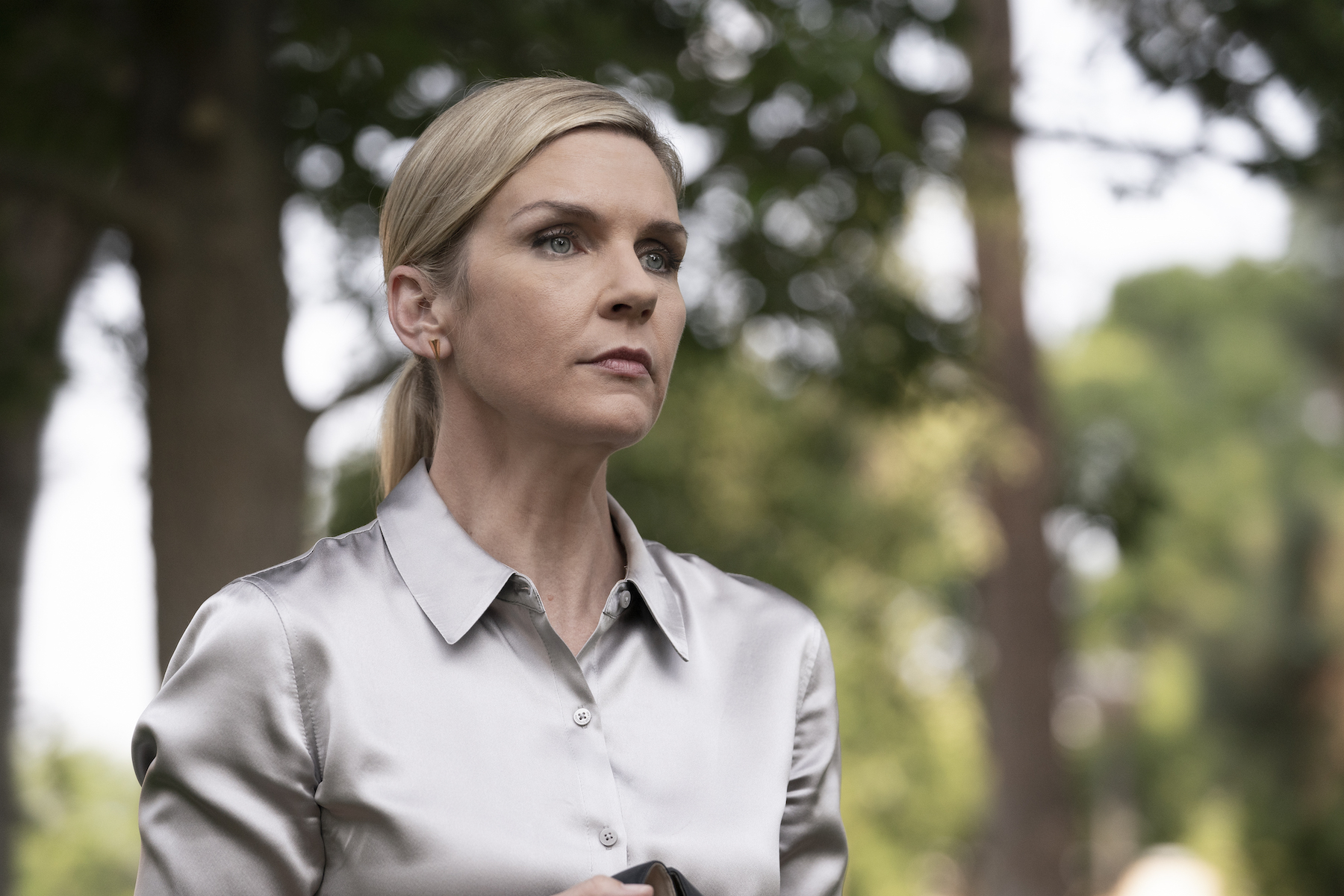 For as much as the rest of this season will be dissected for hidden self-referential details, it’s moments like Kim hesitating at the stop light next to the police car that speak to the full Albuquerque tapestry better than anything else. The number of branching “what-if”s are too many to count at this point, but full credit to Seehorn for another nonverbal Kim moment that speaks volumes beyond the moment itself. Not only does her sunken reaction to the car driving away show that a potential to bring this all to an end has passed, it carries with it the weight of almost everything that’s destined to come after it. It’s a weight that becomes literal when Kim pulls the Lalo-planted gun out the glove box. After how many times her character has referenced guns over the series to date (not to mention wielding ones of the finger variety), there’s a gravity in that realization that’s almost as impactful as her seeing a body fall to the floor on the rug next to her sofa.

Those extra beats to consider a weapon or a zip tie or a madman thirsting for payback are part of the magic of “Better Call Saul,” and it’s unsurprising to see director Vince Gilligan take full advantage of them here. Between the patience of those sequences and the immediacy of following Mike (Jonathan Banks) up apartment staircases and down through the underbelly of the tunnel connecting Gus’ properties, this has the rhythmic highs and lows found in the show’s best episodes. The flourishes of the camera being connected to the chair as Lalo drags it across the living room or matching Gus’ view of grainy surveillance footage (always nice to have something other than flip phones reminding folks that it’s the mid-2000s, after all) are the icing on the bloody, pulsating cake.

One of the things helping “Point and Shoot” is that Mike is fully activated. Banks is incredibly effective at the slow-burn, even-keel version of Mike fueled by staying in control. Instinctive Mike, responding to an extended crisis in real time, adds an urgency makes all the difference, especially when Banks is walking into frame and delivering stern, exact instructions right down the barrel of the camera at a 90° angle.

And it’s Mike who ends up with the final say here, too. The episode doesn’t end on a triumphant Gus having vanquished an enemy. He’s bedridden for now. This one closes with the people brought in to clean up the mess. As Howard and Lalo get loaded into a dual grave underneath the floor of what will one day be an operational meth lab (Gus’ four bodyguards that Lalo shot in the back presumably get a less-dignified resting place), Mike makes the only distinction he can. The guy who tried to kill his boss gets summarily tossed in, while the guy who had no idea what he was involved in gets a gentler toss. But at the end, Howard doesn’t even end up with his shoes, wallet, or wedding ring. In a wave of no-win outcomes likely yet to come, it’s hard to imagine there’ll be many more easy chances to find humanity in the carnage.

“Better Call Saul” airs Mondays at 9 p.m. ET on AMC and is available on AMC+.
Click to expand...

Staff Member
Moderator
I signed up for AMC+ and it wasn't included so i immediately canceled.
Whatever.

I guess when it's done I'll pay for a VPN for a month and binge it on european netflix.
Ridiculous.

news ‘Better Call Saul’ Review: ‘Nippy’ Says a Bitter Hello to the Future and the Past at the Same Time