Every great movie began as a blank sheet of paper. Before a filmmaker or actor can create onscreen magic, they need something to say. So it should come as no surprise that many directors and performers credit scripts for much of their success. Good screenwriters lay the foundation for the beautiful shots and memorable performances that stick with us throughout our lives. In the words of George Clooney, “It’s possible for me to make a bad movie out of a good script, but I can’t make a good movie from a bad script.”

While screenwriting is one of the most important parts of filmmaking, it is also one of the most misunderstood. The fact that it doesn’t require complex equipment, doesn’t make it any easier than cinematography, or editing. Equal parts art and science, a great screenplay needs to tell a compelling story while simultaneously serving as a blueprint for hundreds of people to follow. This responsibility requires a great deal of precision. One page equates to one minute of runtime, and each blank page contains room for 55 lines of text. What you do with those 55 lines separates the dreamers, from the greats.

The endless possibilities and low cost of entry have led countless people to fantasize about becoming screenwriters, only to be shocked by how difficult it can be. Because the best way to learn is through practice and study, we rounded up eight of the best screenwriting books to make the process a little less daunting. Some of the titles listed take a birds-eye view of the craft, others get deep in the weeds of technical advice, and some tell the life stories of the industry’s most successful writers. Whether you’re a veteran refining your craft, an amateur taking your first steps, or simply a movie lover who wants to learn what goes into your favorite films, you can’t go wrong with any of these titles.

“Save The Cat: The Last Book on Screenwriting You’ll Ever Need” by Blake Snyder
Buy: $16.27 Buy it
For many filmmakers, this book is the definitive introduction to the art and business of screenwriting. Snyder breaks many of the art form’s most complicated concepts down into easily-digestible lists, without sacrificing any expertise. Writing with an audience of film lovers in mind, he is one of the most effective explainers of movie magic. The book is most famous for its suggestion that every movie begin with its protagonist “saving the cat,” or doing a good deed that inspires the audience to root for them. That playful tone continues throughout the book, making it as fun to read as it is informative.

“The Screenwriter’s Bible: A Complete Guide to Writing, Formatting, and Selling Your Script” by David Trotier
Buy: $26.95 $20.22 Buy it
This classic of the genre, now in its seventh edition, is exactly what it claims to be: a Bible. While it contains some excellent writing advice, it is most notable for being a comprehensive guide to screenplay formatting. This is the kind of reference book that you keep on your desk for decades, and keep referring back to after you’ve won your Oscar. David Trottier does an excellent job of not just explaining the quirky aesthetic rules of screenplays, but also conveying why those rules exist. Simply put, there is no better guide to Hollywood formatting.

“Screenplay: The Foundations of Screenwriting” by Syd Field
Buy: $13.49 Buy it
In print for over 40 years, this is one of the great primary sources in the study of screenwriting. It was one of the first mainstream books to illustrate concepts that film students now take for granted. Syd Field’s explanations of structure and character are essential, both for the quality of his writing, and the fact that he has influenced generations of screenwriters. The book covers both original and adapted screenplays, so no matter what project you’re working on, you’d be well-served to read this one.

Writing Screenplays That Sell: The Complete Guide to Turning Story Concepts Into Movie and Television Deals” by Michael Hague​

Buy: $14.79 Buy it
Longtime Hollywood script consultant Michael Hague walks writers through every stage of the screenplay process, from brainstorming early ideas, to selling your finished product. His decades of experience examining why scripts fail makes him an invaluable resource for explaining what not to do. The book focuses heavily on structure, the area where he feels most amateur screenplays fall apart. This is a particularly valuable one for any writer interested in working on Hollywood blockbusters, as it discusses commercial formulas at length. Hague also devotes a considerable amount of space to television writing, making this an excellent resource regardless of your career path.

“Story: Substance, Structure, Style, and the Principles of Screenwriting” by Robert McKee​

Buy: $22.67 Buy it
Former USC professor Robert McKee is world famous for his “Story Seminars,” long-form lectures on creativity that have been attended by Oscar-winning screenwriters, and Fortune 500 CEOs alike. His style relies more on high-level artistic ideas than it does on rules and formulas, as he focuses on creating effective stories that can work in a variety of mediums. His book on screenwriting democratizes his lectures, condensing his ideas into a single volume that can be enjoyed by anyone with a story to tell. 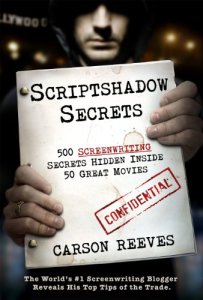 Buy: $2.99 on kindle Buy it
The legendary Hollywood blogger, best known for his reviews of the unproduced scripts circulating in Tinseltown, finds 10 actionable screenwriting takeaways from 50 of his favorite movies. Carson Reeves takes beloved titles, ranging from “The Shawshank Redemption” to “The Goonies,” and explains exactly what sets them apart from lesser films in the same genre. This book is not a film school class about basic story structure. It’s a supplementary resource that examines the difference between a forgettable movie and something that stands the test of time. Once you’ve read a few of the earlier books on this list, this one can help take your craft to the next level. What makes it great is the fact that each suggestion is extremely applicable to any screenplay. His advice avoids soaring rhetoric in favor of tips like, “Start your characters’ names with different letters to avoid confusing readers.” Simple, conversational, to-the-point, and probably the best $2.99 you’ll spend in your screenwriting career.

“Writing Movies for Fun and Profit: How We Made a Billion Dollars at the Box Office and You Can, Too!” by Robert Ben Garant and Thomas Lennon​

Buy: $16.99 Buy it
Once you begin to grasp the craft of screenwriting, it might be worthwhile to learn about the life you are signing up for. This hilarious memoir might be as entertaining as any movie written by its authors. Brutally honest about the ins and outs of Hollywood screenwriting, this endlessly readable saga finds Robert Ben Garant, and Thomas Lennon, recounting their experience writing a string of mid-2000s blockbusters, including “The Pacifier” and “Night at the Museum.” From breaking into the industry and pitching ideas to the daily drama of working with movie stars, they combine real-world advice with entertaining anecdotes. It would be equally appropriate as a film school textbook, or a beach read.

“Adventures In the Screen Trade: A Personal View of Hollywood and Screenwriting” by William Goldman​

Of course, no introduction to screenwriting would be complete without discussing William Goldman. To his groundbreaking original screenplays for “Butch Cassidy and the Sundance Kid” and “The Princess Bride” to his long-rumored rewrites of “Good Will Hunting,” Goldman did more to shape Hollywood screenwriting than just about anyone. His excellent book is equal parts instruction manual and memoir, filled with technical advice for writers as well as stories of his adventures in one of Hollywood’s most storied eras. If you want to know where t
Click to expand...

I'd like to suggest Joseph Campbell's The Power of Myth. It's not about screenwriting, it's about story. This book is pretty much the source of Modern Story Theory.
Truby and Jarvis are both students of Campbell. 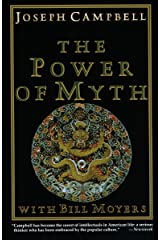 Unknown Screenwriter suggested this one. I had it on pre-order and received it a few days ago... The Hollywood Standard, (3rd Edition just released). Although I have not yet finished it, I am enjoying it much more than Trottier's book. It is short and sweet with beautiful examples. 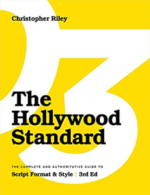 geckopelli said:
I'd like to suggest Joseph Campbell's The Power of Myth. It's not about screenwriting, it's about story. This book is pretty much the source of Modern Story Theory.
Truby and Jarvis are both students of Campbell.

I loved Bill Moyers documentary series by the same name. I tried employing some of the ideas therein in my last short story, "Rebecca's Ladder", my own contemporary take on "Diotima's Ladder of Love" and the "Heroes Journey".

A simple love story of a romantic couple who both ascend the rungs but from different stages in their journey.
Last edited: May 15, 2021
You must log in or register to reply here.

news Roger Michell, RIP: An Ode to the Astonishing Range of the ‘Notting Hill’ Director

Saturday at 10:04 AM
indienews

Friday at 9:43 AM
indienews

news Val Kilmer Is a Hard Man to Know, but Documentary ‘Val’ Goes Too Easy on Him