The 2022 BAMcinemaFest has officially unveiled its lineup. IndieWire can exclusively announce that Sundance breakout documentary “Aftershock” will make its New York Premiere on the opening night of the festival, which kicks off June 23 and runs through June 30.

The fully in-person event will begin with Paula Eiselt and Tonya Lewis Lee’s critically acclaimed documentary. The film exposes the failures of the maternal healthcare system that have led to a disproportionate amount of Black women dying in childbirth. “Aftershock” won the U.S. Documentary Special Jury Award: Impact for Change at the 2022 Sundance Film Festival.

Fellow Sundance selection “2nd Chance” is set to make its New York Premiere, as well as breakthrough filmmaker Andrew Infante’s “Ferny and Luca,” a fresh take on the ebbs and flows of a young Brooklyn relationship.

BAMcinemaFest will also mark the world premiere of Amber Bemak’s performative documentary “100 Ways to Touch the Border,” which follows the 40-year career of radical Mexcian-Chicano artist Guillermo Gómez-Peña, who enacts his interventions by “queering the border,” claiming all borders as queer and liminal spaces.

The festival will take place fully in-person at BAM Rose Cinemas in Brooklyn and will feature a blend of premieres, new restorations, along with in-person filmmaker Q&As.

New restorations of Brooklyn filmmaker Ayoka Chenzira’s shorts “Alma’s Rainbow” (1993) and “Hair Piece: A Film for Nappyheaded People” (1984) are slated to make their respective New York premieres. Both films depict multilayered glimpses into the Black woman’s world, with examinations on beauty and the pressure to conform.

Launched in 2009 as a showcase for new independent films, the annual BAMcinemaFest is an extension of BAM’s year-round film program, collecting the most innovative new work from festivals in the U.S. and around the world and bringing them to New York City audiences.

See below for the full lineup. Descriptions courtesy of the festival. Ticketing info is here. 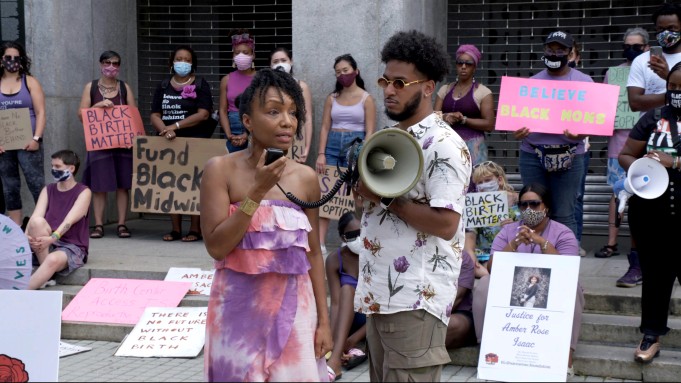 This critically acclaimed first documentary from Ramin Bahrani follows the life and contradictions of the man that created, and self-tested, the bulletproof vest. 89min. New York Premiere. Documentary.

Desperate to control something, a college grad decides to win the affections of a boy from her hometown in Kit Zauhar’s exciting, honest film by and about a young woman of color. 84min. New York Premiere. Drama.

A powerful NY-filmed documentary that shines a light on the Black women, and bereaved partners, who are failed by the U.S. maternal health system. 86 min. New York Premiere, Opening Night Film. Documentary. From Onyx Collective and ABC News, the film will stream on Hulu domestically later this Summer.

Known for her socially conscious films that challenge stereotypes about Black culture, Ayoka Chenzira’s first feature film is a coming-of-age dramedy that highlights a group of middle-class Black women living in Brooklyn. As Rainbow (Platt) enters womanhood and navigates her own experiences around beauty standards, self-image, and the rights of Black women over their own bodies, her pragmatic mother Alma Gold (Weston-Moran) and free-spirited aunt Ruby Gold (Kirby) disagree on the “proper” direction for Rainbow’s life. In this multi-layered Black woman’s world, Rainbow, Alma, and Ruby wrestle with love and what it means to exert and exercise their own agency. New restoration!

In this satirical short, Chenzira utilizes mixed media and animation to unpack the stereotypes associated with Black hair while critiquing the limits of the European beauty standard. She draws attention to the physical pain Black women endure to straighten their hair, and the emotional pain that comes as a result of the pressure to conform. New restoration!

A filmmaker searches for answers in a strict Buddhist monastery and at the bottom of a sundae in this doc-existential comedy. 97min. New York Premiere. Documentary.

An award-winning lo-fi rom-com, shot in Brooklyn, that follows the hot and cold relationship of a naive pretty boy and a rough and tumble disco queen. 70min. New York Premiere. Comedy/Drama.

Filmed on the weekends across four months during 2020, Tyler Taormina cast his own Long Island family and neighbors in the delicate cinematic meditation on late-night life, which premiered at the Berlin Film Festival. Taormina takes the audience through the nightly routines of suburban residents as they clean their offices, meet their lovers, apply make-up before going out, and rollerblade around town. Dreamlike, gentle, and strangely ominous, this sensory series of vignettes “is a hypnotic ode to the night owl” (The Film Stage). 62min. New York Premiere. Drama.

From prairie towns in Nebraska to the quiet nightlife of suburban Long Island, these visually stunning films capture the quiet essence of humanity. 13min. Screening with HAPPER’S COMET.

A lyrical exploration of family, loss, connection and nature. 15 min.

This autobiographical film documents an attempt at healing the trauma of touch between mother and child, as the filmmaker and their mother talk openly for the first time about the intergenerational trauma and abuse within their lives. Present-day phone conversations are juxtaposed with archival VHS footage, creating a connection between the past and a re-write for the future. 12min.

During the pandemic, two queer BIPOC friends sustain each other through communication and connection in this short non-fiction film about the lack of touch for single people catalyzed by Covid-19. 12min

When she returns to rural West Texas to document the effects of the boom-and-bust nature of the oil industry on her hometown, the filmmaker unexpectedly captures the political transformation that takes place in her family over five years and two election cycles. 16 min.

From activists fighting for the rights of incarcerated pregnant people to singles searching for touch during the pandemic, these shorts focus on family, connection, and trauma. 17min.

Winner of the Best Short prize at the 2022 Big Sky Documentary Film Festiva, Shut Up and Paint follows the painter Titus Kaphas as he turns to film when the art world tries to silence his voice. 20min.

An experimental documentary collaboration between myself, Samuel Geiger, and Lauryn Welch. The film is a window into Sam’s experience living with Ehlers-Danlos Syndrome, a painful connective tissue disorder that limits his mobility and functionality. 10min.

A food market and playground in Queens, NY becomes the site for this film inspired by Paolo Javier’s Original Brown Boy poems. The film itself transforms into an ars poetica/cinematica—a meditation on writing and making images in the liminal space between a global pandemic and what might come next—as five New York City performers speak in verse while wandering through food stalls in search of a new sensation. 8min. World Premiere.

Filmed on the Qualla Boundary and Cherokee Nation, ᎤᏕᏲᏅ (Udeyonv) (What They’ve Been Taught) explores expressions of reciprocity in the Cherokee world, brought to life by an elder and a first language speaker. Premiering at Sundance, the documentary circles the intersection of tradition, language, land, and a commitment to maintaining balance. 9 min.

In this narrative/documentary hybrid, Lily Gladstone stars as a grieving woman traveling to the Texas-Mexico border to reunite with her Oglala Lakota family. 85min. New York Premiere. Drama.
Click to expand...

news Tribeca 2022: 8 LGBTQ Films We Can’t Wait to See at This Year’s Festival