Most film imports from France are fresh from festivals and festooned with critical hosannas, which means American moviegoers don’t often get to see more populist French fare.

For example, actress-writer-director Lisa Azuelos had directed seven movies solo in France before she sold to Amazon her eighth feature, “I Love America” starring Sophie Marceau (“Braveheart,” “The World is Not Enough”). This romantic autofiction is part memoir, part culture comedy, as Marceau plays a 50-year-old filmmaker based on Azuelos who takes off for Los Angeles just as her mother is dying.

The movie mixes time frames, from Azuelos’ foray into Hollywood, including Tinder dating, to a look back at her fraught relationship with her mother, pop singer Marie Laforêt (Sophie Verbeeck). Azuelos only saw her estranged parents several times a year; her mother was always on tour. “I would see them maybe for vacation one month, but that’s it,” said Azuelos in our Zoom interview. “She wasn’t a mother, she didn’t care about kids that much. She didn’t have the patience.”

In September 2019, Azuelos decided to take a year off and move to L.A., where she had lived happily 10 years before. She was confronting an empty nest after her third child went off to college. “I was alone in Paris, with no kids to raise anymore,” she said. “My movie [‘Sweetheart’] just came out. So I decided to come here to take a year off, enjoy life. And then suddenly, my mom is getting worse and worse. So I understand she’s going to die.”

Three months later, her mother passed, and Azuelos started keeping a journal about her loss, being alone in LA., and having her best friend, co-writer Gael Fierro (played by Djanis Bouzyani) set up her first dating app, Tinder. “Suddenly I felt like I’m not the only one alone in the city,” she said. “I felt that all those lonely souls and people want to connect and I felt less sad about it.” 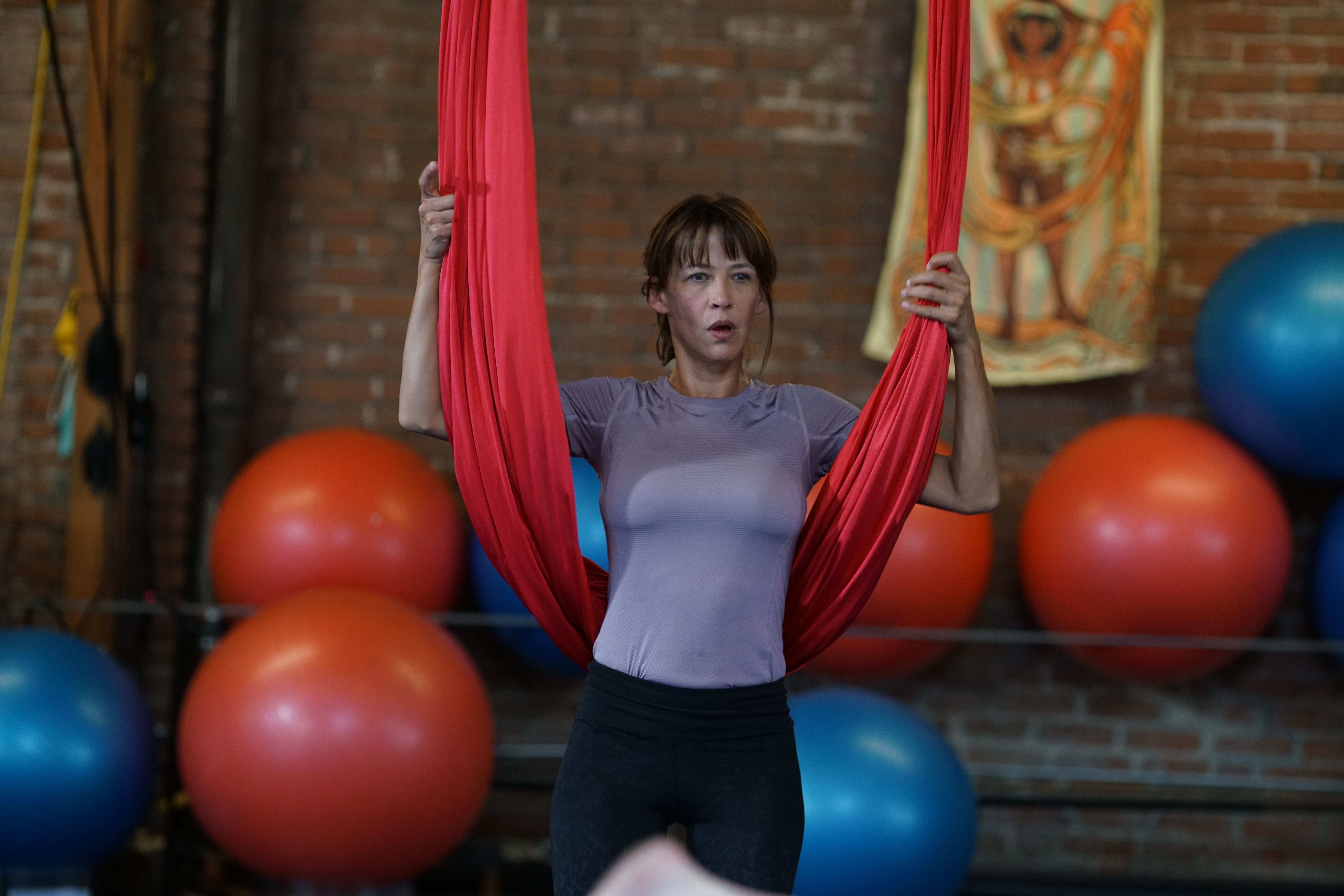 And like the movie, on her first try, she clicked on a younger man, and they hit it off immediately. “I call him the patient zero on Tinder,” she said. “I feel blessed because I hear so many horrible stories about super bad dates and I just meet this guy and he’s my soulmate until today. We’re super close. He’s not my lover anymore because we don’t live in the same city and maybe the difference of age, but he really is my soulmate. And we spend quality time like, five, six times a year.”

During lockdown, Fierro looked at what she was writing. “And suddenly, it became a script,” said Azuelos, whose mission is to feed the appetite for stories about women. “I feel like mothers and women in general feel always guilty about having found sexuality,” she said. “I needed to share this experience. And also it happened because I was forgiving my mom. I suddenly felt so much love when she died, I was in the room with her. Sometimes matter blocks energy, and I felt this in my body. And suddenly it was the first time I was feeling her love. And being able to receive love made me able to receive love in a more general way.” 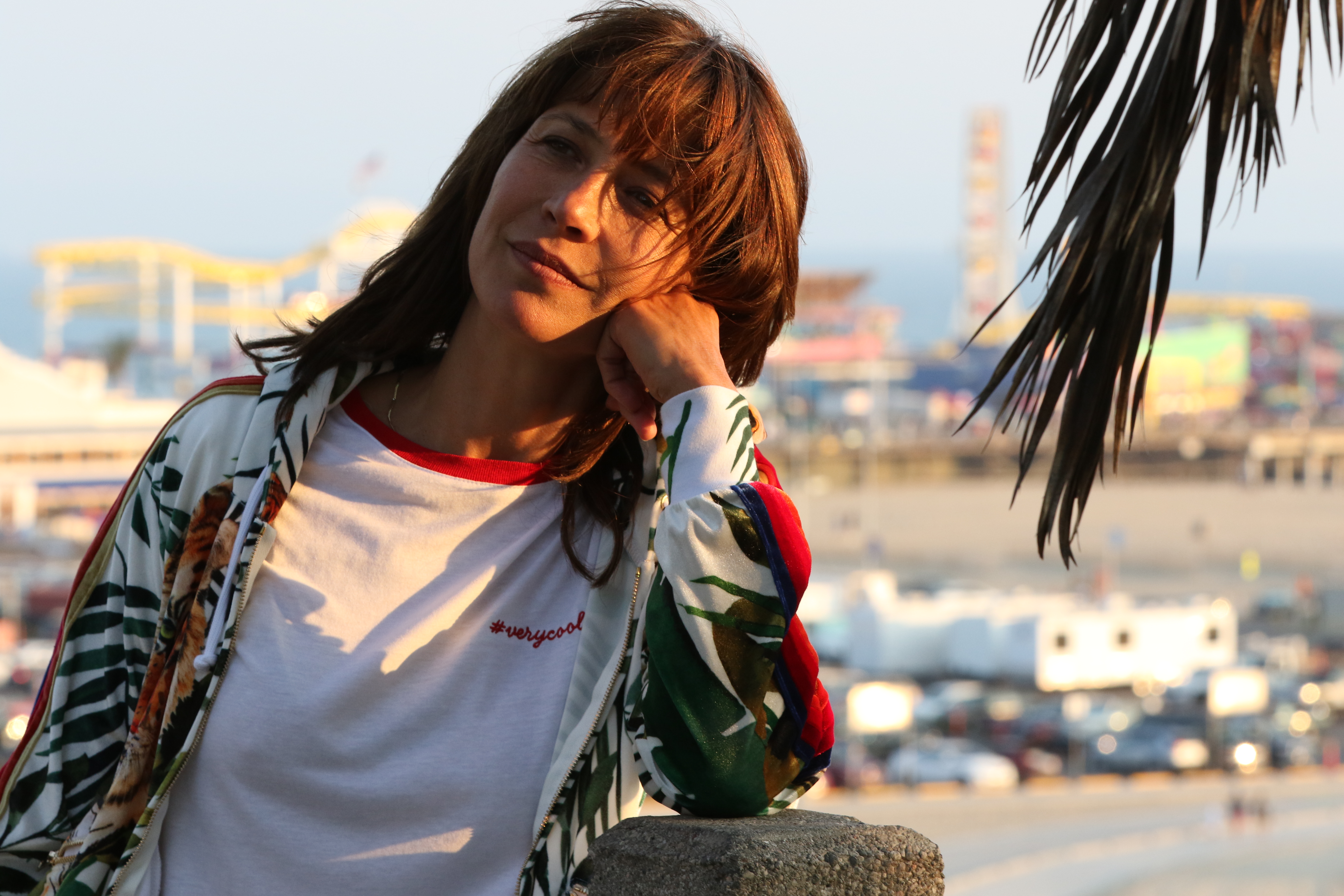 Azuelos started as a young actress because at first, she didn’t know women could be directors. At 25, her father sent her to Los Angeles to take Robert McKee’s three-day writing course. “It was like I was in a church and he was the priest and I was downloading grace,” she said. “It was crazy for me. It was a lifetime revelation where you understand that you are where you’re supposed to be.”

In France, where budgets are low and relationship films are popular, female directors have an easier time than in Hollywood. And sexuality is more frank and casual onscreen. “There are no bras in bed,” Azuelos said. “I can’t stand all those sex scenes with women with bras. Who keeps her bra when she’s making love? No, No. This is my little war against America. You can show guns, but you can’t show nipples.”

Marceau, who was also born in 1965, rejoined Azuelos for the first time since she starred in her film “LOL” in 2014. “I’m interested in her POV, her modernity,” said Marceau on the phone from France. The actress almost turned down the script because “it was a bit messy,” but Azuelos won her over when they met. “I’m happy I did it. She likes to let the actors improvise, as long as we keep the same final idea. She likes actors to be very natural and to make it personal a little bit. She tells her story, but she wants us to be participating.” 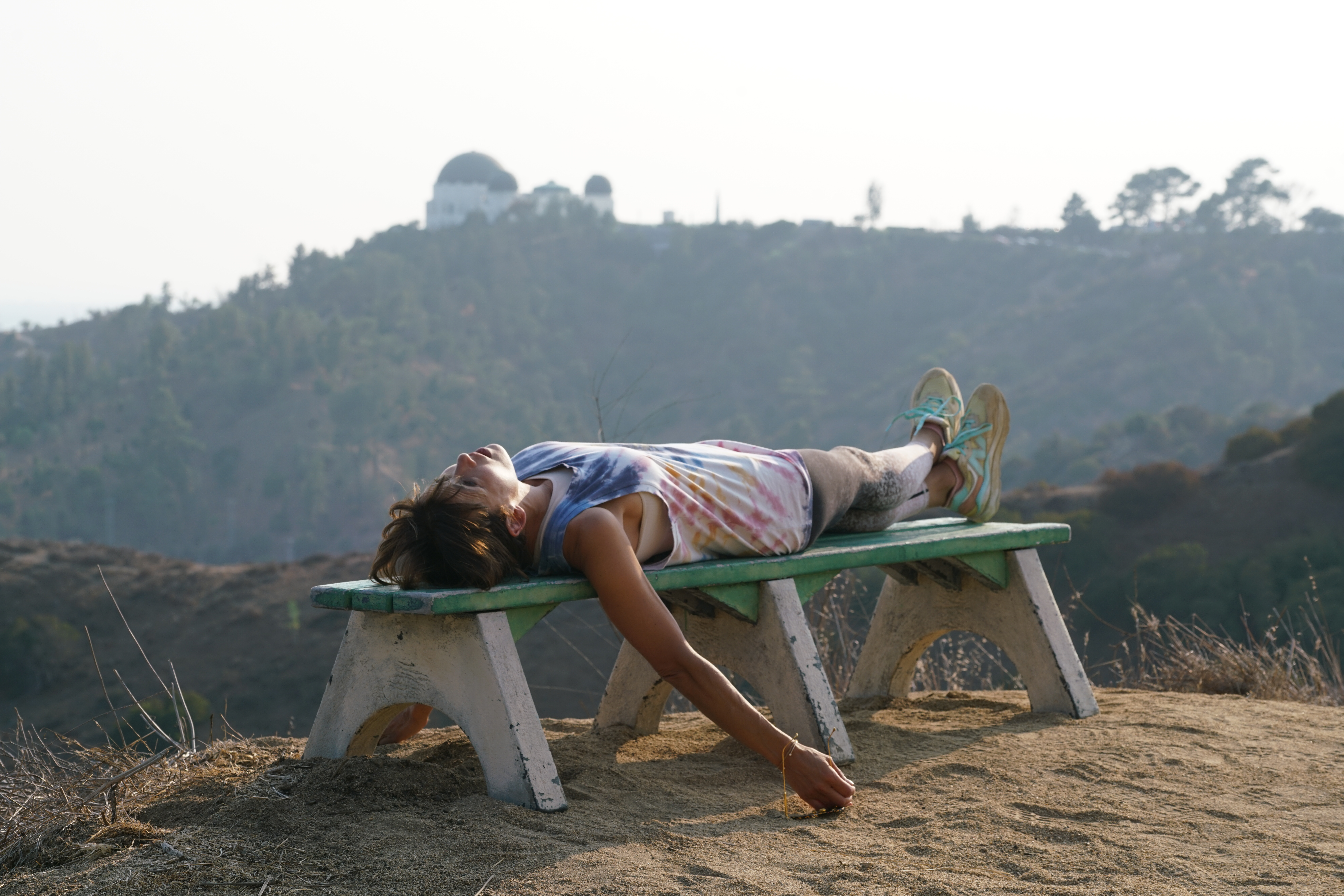 Playing a woman based on her director was no problem. “I don’t mind if the character is alive or not alive,” said Marceau. “She’s somebody I have to incarnate and become. I want to understand it as much as I can, so having the director in front of me is helpful, but I need to take it completely and make the part mine.”

The actress enjoyed playing a 50-year-old woman with agency, who’s in control of her life. “The reality of women has been changing a lot over the past 10 years,” Marceau said. “#MeToo brought a collective consciousness about how women are treated in the world. Lisa has a lot to say about how being an older woman doesn’t mean being an old mother or an old wife. We can allow ourselves to be more independent and have as much freedom as a man. It’s important to tell women they can trust themselves. We don’t think life is over at 50, not just sexually. Women are allowed to be beautiful and to show it. Women are getting younger and younger and more full of life. It’s good to make movies that show that we have a life and we can do what we want with it.”

Marceau colluded with her costume designer to get through her all-nude Tinder date with a nudist. “I had a big bag that saved me,” she said. “Otherwise I would have felt really uncomfortable. The guy who was naked was feeling so comfortable, so easygoing. There was nothing perverse or even ambiguous about him. It’s interesting to get naked in front of somebody you don’t know anything about, it makes it very equal.” 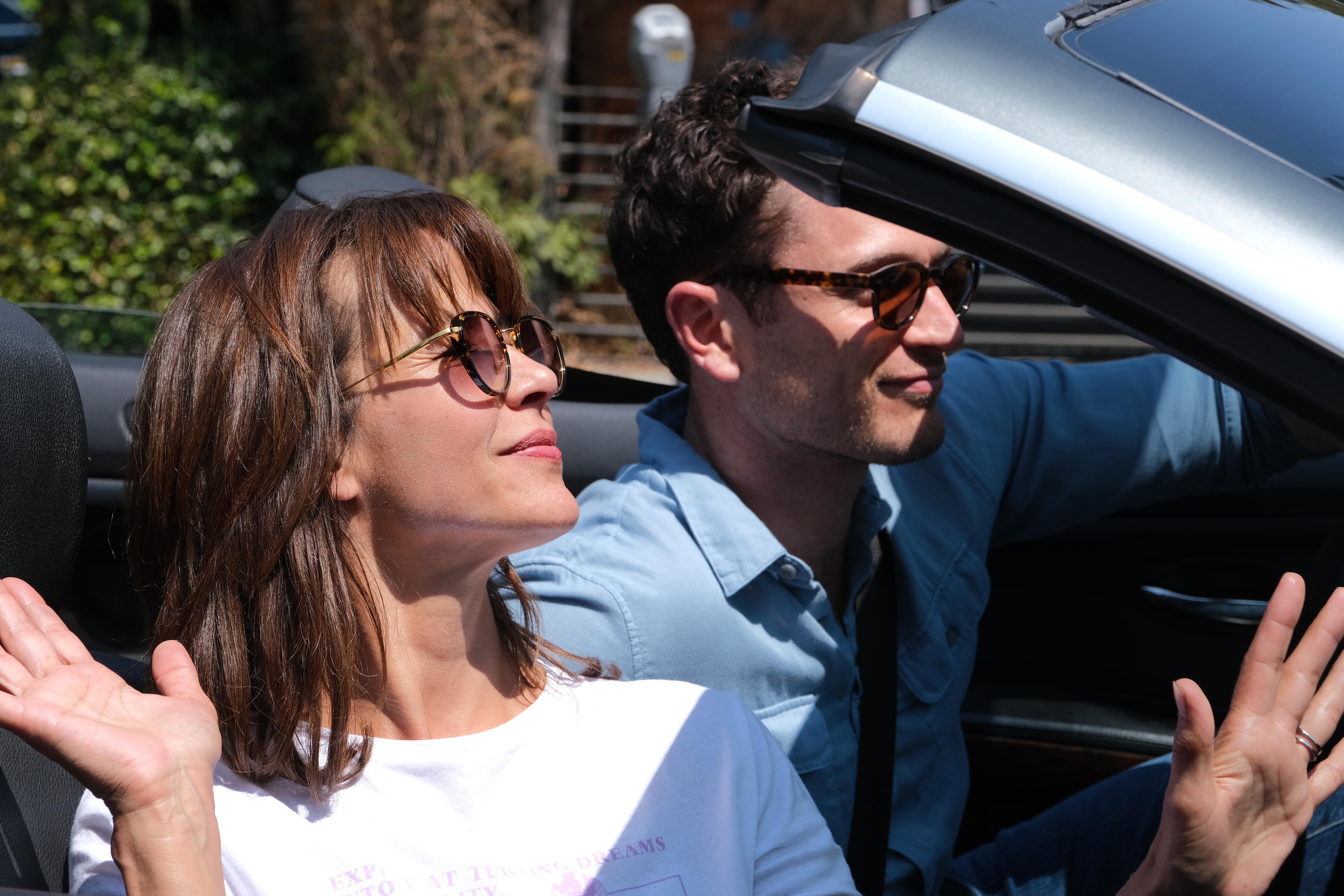 For her part, Marceau finds men the old-fashioned way; she does not use dating sites. And she has never wanted to get married. “I always had long and serious relationships,” she said. “When I give my word and my heart I give it really; I am not frivolous, I am serious in my relationships, but I don’t feel comfortable with marriage at all.”

Marceau has spent lots of time working and hanging with friends in Los Angeles. “I see it changing,” she said. “It’s more like a city now. I remember L.A. as a big land of distances, roads and sand. Now everything gathers together, and it becomes big city, like Paris. It’s on the sea: the light, the colors are beautiful, it’s a special place. L.A. is always cool and cold at the same time. I can still get lost and lonely there.”

During lockdown when everyone was watching films online, Azuelos thought about taking the movie to Amazon instead of taking the usual theatrical route. “I don’t believe that people are going to see little stories like mine in theaters,” she said. “They go to see Marvel, they go to see Nolan, maybe Fincher. But they didn’t even go to see Spielberg’s ‘West Side Story.’ I’m only telling little human stories. Today, people are not ready to go and pay for them. And I want my movies to be seen.”

When Azuelos met with the head of Amazon, France, he wanted the movie. After opening well ahead of the election in France, the film hit 122 countries on April 29. “People hate Amazon in France because they feel they are using workers in a very bad way,” she said. “They’re very pissed that I did an Amazon movie.”

”I Love America” is now streaming on Amazon Prime Video.
Click to expand...

indienews said:
“I can’t stand all those sex scenes with women with bras. Who keeps her bra when she’s making love? No, No. This is my little war against America. You can show guns, but you can’t show nipples.”
Click to expand...

THIS!!!! 100%.
www.maralesemann.com
You must log in or register to reply here.

news ‘She Said’: Bringing the Personal Stories to the Forefront of the Investigative Thriller