By any standard, Gordon Parks (1912-2006) led an extraordinary life as a photographer, filmmaker, composer, author, eyewitness to several major events of the 20th century, and above all a storyteller. As a Black man born into poverty in an America not-so-far removed from slavery, as Jim Crow laws swept the south, his life is even more remarkable. In “A Choice of Weapons: Inspired By Gordon Parks,” the HBO documentary premiering November 15, director John Maggio attempts to capture the essence of Parks, by celebrating his motivating ideology of the artist as activist, through the reflections of the generation of artists he inspired. A welcomed effort, the film doesn’t fully commit, resulting in a rather uninspired portrait of one of America’s greatest artistic trailblazers.

“A Choice of Weapons” blends Parks’ striking photographs (spanning more than 40 years) with footage of the artist in conversation, supported by reflections from a starry cast of interviewees, including filmmakers Ava DuVernay and Spike Lee; actor Richard Roundtree; photographer LaToya Ruby Frazier; retired basketball player Kareem Abdul-Jabbar; journalists Jelani Cobb and Anderson Cooper; Khalil Muhammad, historian and professor at Harvard’s Kennedy School; Bryan Stevenson, executive director of the Equal Justice Initiative; Darren Walker, president of the Ford Foundation; and others. Their contributions help contextualize Parks’ artivism, although they lean toward the perfunctory, and don’t offer the penetrating gaze into the mind of the celebrated artist as audiences may expect.

Parks described his camera as his “choice of weapons.” In a foreward for author Ralph Ellison, he wrote of how a 35mm camera might be more effective than an actual gun. As filmmaker Spike Lee says of Parks’ chosen weapon: “That was a motherfuckin’ bazooka! That wasn’t no six-shooter or rifle.”

Indeed. Although that expressed verve is missing from the documentary overall.

A true American treasure, Parks captured the essential humanity of anyone lucky enough to be in front of his lens. Through his work, he disrupted traditional notions of what it meant to be an American and fought for social justice locally and overseas, eventually adding novelist and Hollywood film director to his repertoire. But the film does not fully convey just how potent Parks’ images were, and what they meant to an America amid a process of radical, revolutionary change.

Photography redeemed Parks. During his childhood, he lived “a quintessentially Black experience,” as Equal Justice Initiative director Bryan Stevenson states in the film. The Gordon Parks celebrated today emerged during the Great Depression in the 1930s, when an organization called the Farm Security Administration (FSA) began hiring photographers to shoot impoverished communities across the U.S. While most turned their cameras on struggling white farmers, Parks boldly photographed Ella Watson, a Black woman who cleaned the FSA offices who Smithsonian Secretary Lonnie Bunch III described as “the backbone of America” in the documentary. In a powerful 1942 image by Parks that appropriates Grant Wood’s famed 1930 painting “American Gothic,” Watson is framed with the U.S. flag as a backdrop, holding a broom and mop. The photograph, which was a source of controversy at the time, underlined Watson’s ability to stand tall amid such underappreciated and strenuous work.

The most expressive testimonials in Maggio’s film come from a host of relatively unknown, contemporary photographers who stand on Parks’ shoulders and have inherited his activist ethos. Through the lens of three photographers, Parks’ legacy comes to life. Devin Allen whose photograph “Baltimore Uprising” of the Freddie Gray protests was featured on a 2015 cover of Time Magazine; LaToya Ruby Frazier, who for five years followed the Flint, Michigan, water crisis and most recently photographed Breonna Taylor’s family for Vanity Fair; and Jamel Shabazz, whose photographs on the streets of New York form a visual history of the hip-hop era while simultaneously affirming marginalized communities.

Early in the film, Allen testifies: “For the first time, I understood what Gordon Parks was talking about — that the camera is a real weapon. I realized how powerful I am with a camera in my hand.”

Frazier, who refers to Parks as a renaissance man, offers: “I’m not trying to replicate what he did; I think I’m just someone who is earnestly invested in adding to his legacy. That means using my work to advocate for overlooked women artists, particularly Black women not valued by society.”

As with Parks, the camera became Shabazz’s weapon of choice to counter incomplete narratives of the communities he captures. “With a clear vision and purpose I set out on a lifelong endeavor to use my creative gift to make images that reflected love, friendship and family, with the hope that these photographs, through exhibitions, publications and the various social media feeds, could show that honor and dignity is very prevalent in communities of color.”

For each, this means embracing the route of independent artists representative of a generation that cares about humanity while fearlessly interrogating the complexities and ugliness of America’s past and present — the Gordon Parks way. 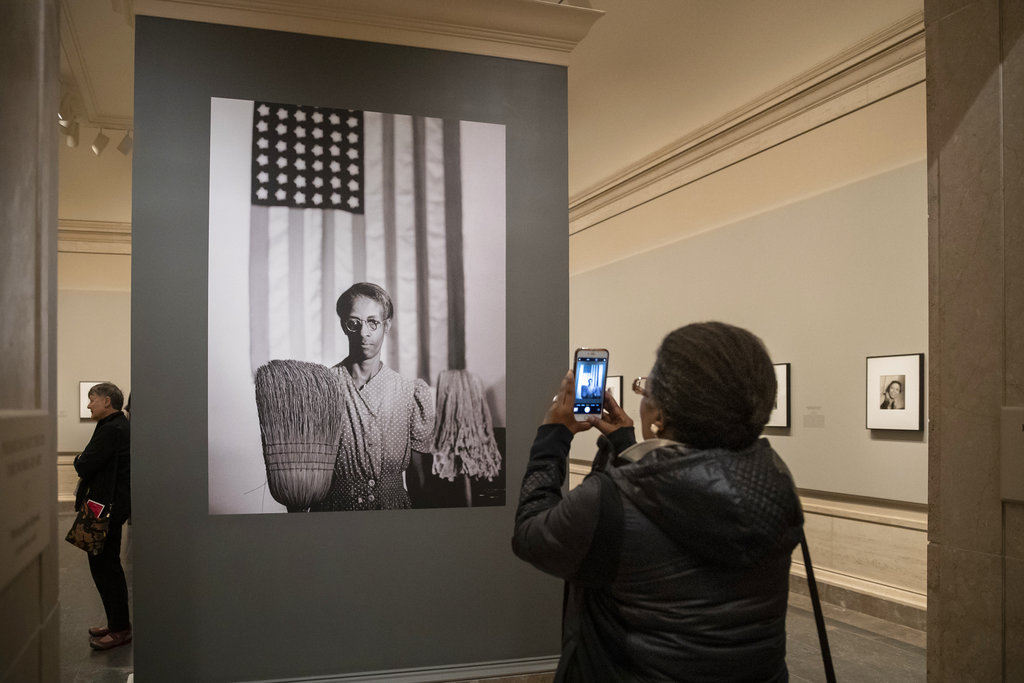 Gordon Parks exhibit (“American Gothic” featured) in 2018 at the National Gallery of Art in Washington.

Maggio’s documentary is not a Parks biography. It doesn’t reach deep enough into the corridors of his memory, but merely recounts, through the reflections of others, what shaped him to become one of the most diversely talented figures in American culture.

For exhaustive details on how Parks survived a rough upbringing in Kansas to become one of the country’s most sought-after photographers, how he survived dehumanizing racism to capture some of the most indelible images ever to document American life with a focus on social justice, race relations, and the African American experience, read his autobiography “A Choice of Weapons,” or any of the other half-dozen non-fiction books he wrote.

Here, however, formal aspects of his photography, including his decision-making process, aren’t much delved into; nor is his early use of color at a time when color photography was still scorned by artists like Walker Evans as lacking in artistic credibility (Parks played a role in elevating appreciation of color photography as “serious art”).

And there’s also the matter of Parks’ short-lived but impactful filmography. His blaxploitation classic “Shaft” gets some coverage, but the criticisms leveled against the film, and blaxploitation films generally (notably the perpetuation of harmful stereotypes), aren’t wrestled with at all.

A film could be made of Parks’ Ella Watson portrait, which offered startling, truthful commentary on the intersection of race and class in America; as could films about other captivating threads Maggio introduces, including Anderson Cooper’s teasing of a romance between his mother, Gloria Vanderbilt, and Parks; and Parks’ daughter and ex-wife connecting elements of “Shaft” to the director’s own perspectives on life and living.

Parks’ exceptional talent as a photographer and his activism are a force unto themselves, and have empowered other creatives to adopt a similar urgency in their work. And director Maggio’s reverence for Parks is certainly palpable in his documentary. It’s just not the deep-dive necessary to complement the scope of the work he created, and the impact he made, that would make the film truly enriching and compelling. But it might be enough to serve as a cursory introduction for the uninitiated.

Executive produced by Kasseem “Swizz Beatz” Dean and Alicia Keys, “A Choice of Weapons” premieres Monday, November 15 at 10 p.m. EST on HBO and will be available to stream simultaneously on HBO Max.
Click to expand...

news David Harbour: A Movie Like ‘Goodfellas’ Couldn’t ‘Exist in This Climate’ of MCU Domination

news Jason Blum Ready to Move on from ‘Paranormal Activity’: ‘That Last Movie Was Terrible’